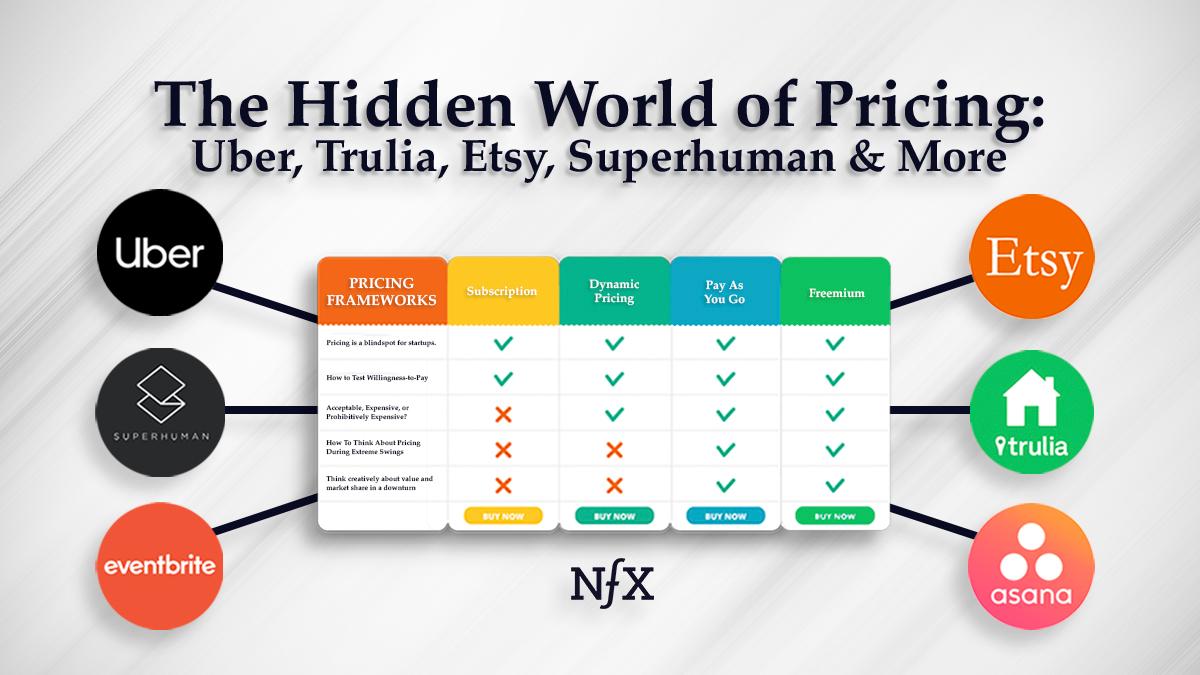 It’s remarkable how much new growth we unlocked at Trulia once we understood the counterintuive truths of pricing.

We had launched our product, revenue was doubling YoY, and the business was rapidly scaling. We were getting ready to IPO and had a huge vision for our product evolution. But we were missing a critical leverage point that ended up being one of our key growth drivers: Pricing Strategy.

Pricing is often treated as an afterthought at many startups, and a study of nearly 2,000 companies shows that pricing has an extremely high 72% correlation to startup failure.

What changed the game for us at Trulia was understanding the underlying mechanics of pricing. It is the hidden driver behind nearly every breakthrough company out there – Uber, Etsy, Trulia, Asana, Eventbrite, Superhuman, and more.

Madhavan Ramanujam is a legendary Jedi Master of pricing among tech unicorns including Trulia. He is the author of Monetizing Innovation and a partner at Simon-Kucher.

Today Madhavan and I are sharing the frameworks, tactics, and hidden truths Founders need to know about pricing — and how, when done correctly, it can dramatically lever-up growth.

Below are key takeaways from our conversation.

1. Pricing is a blindspot for startups.

2. How to Test Willingness-to-Pay

Pricing is one of the most important and least understood aspects in the startup world. Here, Rahul Vohra, Founder & CEO at Superhuman, shares his methodology for pricing influenced by Madhavan Ramanujam’s book, Monetizing Innovation.

Before you figure out pricing, you must first figure out your positioning. For example, Superhuman is a premium tool for a premium market, and what follows is a relatively easy way to get a pretty accurate answer of what would make for a decent price. Now in the book, Madhavan covers lots of ways to develop pricing. We use one of the easiest methods, which is the Van Westendorp Price Sensitivity Meter. So in late 2015, we asked hundreds of our earliest users the following questions:

If you have a premium position, the question to focus on is the third question, which is when does it feel expensive, but you’d still buy it anyway? One can imagine that Tesla did that with the Model S. And for us, the median answer to that third question actually turned out to be $29 per month, and then a few conversations with some pricing experts later and we rounded up to $30 per month because when you end a price in the number nine, that doesn’t signal quality, that actually signals value, and we’re all about signaling quality. So, that’s how we picked our price.

So that’s how I would advise folks to figure out the first answer to their price. But once you’ve done that, it is important to do a quick gut check on market sizing. For example, with that price, can you grow into a billion-dollar valuation? Now, let’s assume at that point, valuation is 10 times your run rate. So our run rate would have to be a hundred million dollars for Superhuman. That would be 300,000 subscribers at $30 per month. And that’s conservatively assuming no other ways to increase revenue per user, for example, without building new products or going further upmarket. And we asked ourselves, do we think that we can get to hundreds of thousands of subscribers? We answered emphatically, yes. And so we went ahead with that price.

Read more about the product frameworks Rahul developed at Superhuman.

4. How To Think About Pricing During Extreme Swings

During the COVID-19 pandemic, we are seeing at a high level two types of patterns. Either your demand spikes like crazy or demand is falling and often pretty fast.

What to do when customer demand is spiking

What to do when you are losing demand

5. Think creatively about value and market share in a downturn

8. Why 72% of Attempts to Monetize Innovation Fail

9. The 4 Ways Your Monetization Fails

13. Listen to Other Top Pricing Articles from Founders & Investors

Stay up to speed
Weekly resources, news, and stories. Be the first to know and get insider tips.
208,816 startups read our weekly essays.
Connect with
Pete Flint