Does Real Identity Matter for Networks? 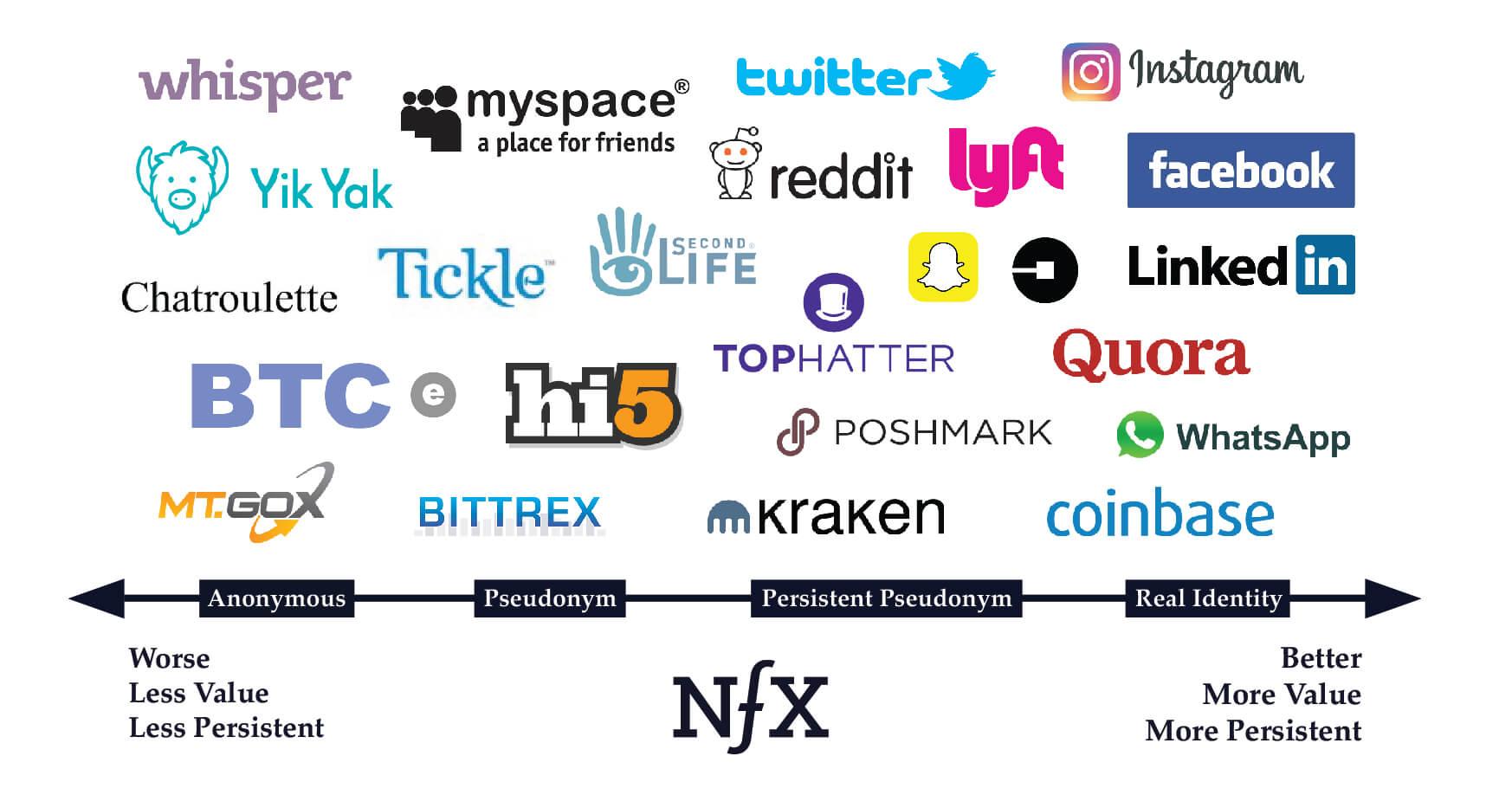 One of the key choices Founders of network businesses must make is how much to tie user profiles to real identity. More broadly called “nodes,” profiles on a network can lie anywhere on a spectrum from purposefully anonymous (e.g. Monero, ZCash, Whisper, Yik Yak) to using real-names (e.g. Facebook, LinkedIn).

Over our years investing in networks like Lyft, DoorDash, Houzz, and Poshmark, we’ve observed a very strong correlation between tying profiles to real identity and a higher probability that a network endures and becomes a valuable business — a correlation that usually goes unobserved.

It’s no coincidence that the two most valuable online networks in the Western world were also the first networks to achieve stable growth with real names in their profiles — LinkedIn in 2002 for professional profiles, and Facebook in 2004 for broader social profiles.*

Using real identity in user profiles is not the easiest path when you’re starting out. Real identity requires more commitment from your users and introduces greater risk, so the barrier to activation is often higher. It’s one reason why LinkedIn grew so slowly for their first three years.

Once LinkedIn and Facebook  got people to use their real names, however, the users became very invested over the long term in maintaining and growing their online presence and online network, much as they are invested in growing their reputation and standing in real life.

Using real names increases user engagement which causes networks to grow in size, density, and activity — all of which builds a stronger network effect in your company. The more active and committed the nodes on the network, the more powerful the network effects.

On the other hand, networks with profiles that allow for more anonymity often grow more easily at the beginning because of the lower commitment required. Long term, however, we’ve seen them burn out and produce less value on average.

How did Facebook get people to use their real names when people weren’t yet comfortable putting real-name profiles out in the open (unless it was a resume)? By launching in a constrained environment of perceived safety where it already made sense to show your real name: college. Working within the college niche, they built up a full head of steam even though it would be 18 months before the rest of the world was ready for a network with open, real-name social profiles.

When Facebook finally did break out of the college niche into the mainstream, online Facebook profiles quickly became tied to personal identity and reputation in real life. For the first time, your online social media profile was anchored in your real name, which doesn’t ever change. The same thing happened later for professional identity with LinkedIn.

Facebook wasn’t the first online social network at the time it launched. Far from it. The social network space was booming. There were companies like MySpace, Friendster, Hi5, Tickle Social Network, Piczo, Orkut, and others. Today, those are all dead, despite having tens of millions of users each before Facebook had even launched.

Why did they all die out? Because they all differed from Facebook in one underappreciated but significant way: their user profiles were either anonymous or used pseudonyms. Those pseudonyms could easily be separated from a person’s real life identity, and so although many of these networks grew fast and became big for a time, they ended up proving vulnerable and fizzling out.

The vulnerability came from having weaker network effects, because as networks they weren’t as closely tied to user’s real identities. Their users were therefore less committed and easier for a competitor to come along and steal — which is exactly what happened.

Networks such as Twitter, Reddit, and Snapchat also have usernames that differ from people’s real names, but they’re still around. This is because their user identities, in contrast to the dead anonymous/pseudonymous networks discussed earlier, are persistent over time and partially tied to real-world identities (e.g. handles like “@realDonaldTrump” on Twitter).

These semi-pseudonymous networks have strong enough network effects to fend off the competition because they’ve given their users a persistent online identity to which they commit. As social creatures, people are emotionally invested in creating, building, and maintaining their reputations — even if that reputation is semi-virtual.

One important lesson here is that engagement matters to network effects. A first level understanding of network effects is that they occur when more users = more value for existing users. That’s true, but go one level deeper, and you realize it’s actually the amount of usage that matters.

If you have a bunch of semi-active or inactive users on your network, you’re going to lose to a network with highly invested users who use it all the time. Those active users are going to create more value for the other users on the network than your sporadic users do for yours. A phone is no good if the fire department doesn’t pick up the phone when you call. Posting on Facebook would be a lot less appealing if people were rarely online to see it.

This is why we say “start with the white-hot center” of your network and expand out from there. A dense, highly active network will outperform a larger but less active one every time.

* Note: Three years before FB opened up outside colleges, Friendster launched a general social network with real names and grew rapidly.  However, Friendster never achieved stability, either in technology or product experience. Jonathan Abrams, the founder of Friendster, told us that they battled against “heavy criticism for focusing on real names,” and suffered from “epic mismanagement.”

James Currier is one of Silicon Valley’s foremost experts in growth and network effects and a four-time serial entrepreneur. He is also a pioneer of user-generated models, viral marketing, A/B testing, crowdsourcing, and myriad other growth techniques now followed by nearly all technology companies. He has previously invested in some of today’s most iconic companies, including Lyft, DoorDash, Poshmark, and Houzz. Today, he is a Managing Partner at NFX. Follow James on Twitter here.

NFX is a Pre-Seed and Seed venture fund based in San Francisco. Founded by entrepreneurs who built 10 companies with more than $10 billion in exits across multiple industries and geographies, NFX is transforming how true innovators are funded. Follow us on Twitter.

Stay up to speed
Weekly resources, news, and stories. Be the first to know and get insider tips.
176,873 startups read our weekly essays.
James Currier
5-time founder. Expert on network effects.
Palo Alto, CA
TwitterSignalLinkedIn
More by James CurrierSee all 107

More on Network EffectsSee all 34

The Network Effects Of Bitcoin [An NFX Video]