The Psychology of Founders Who Win in Downturns 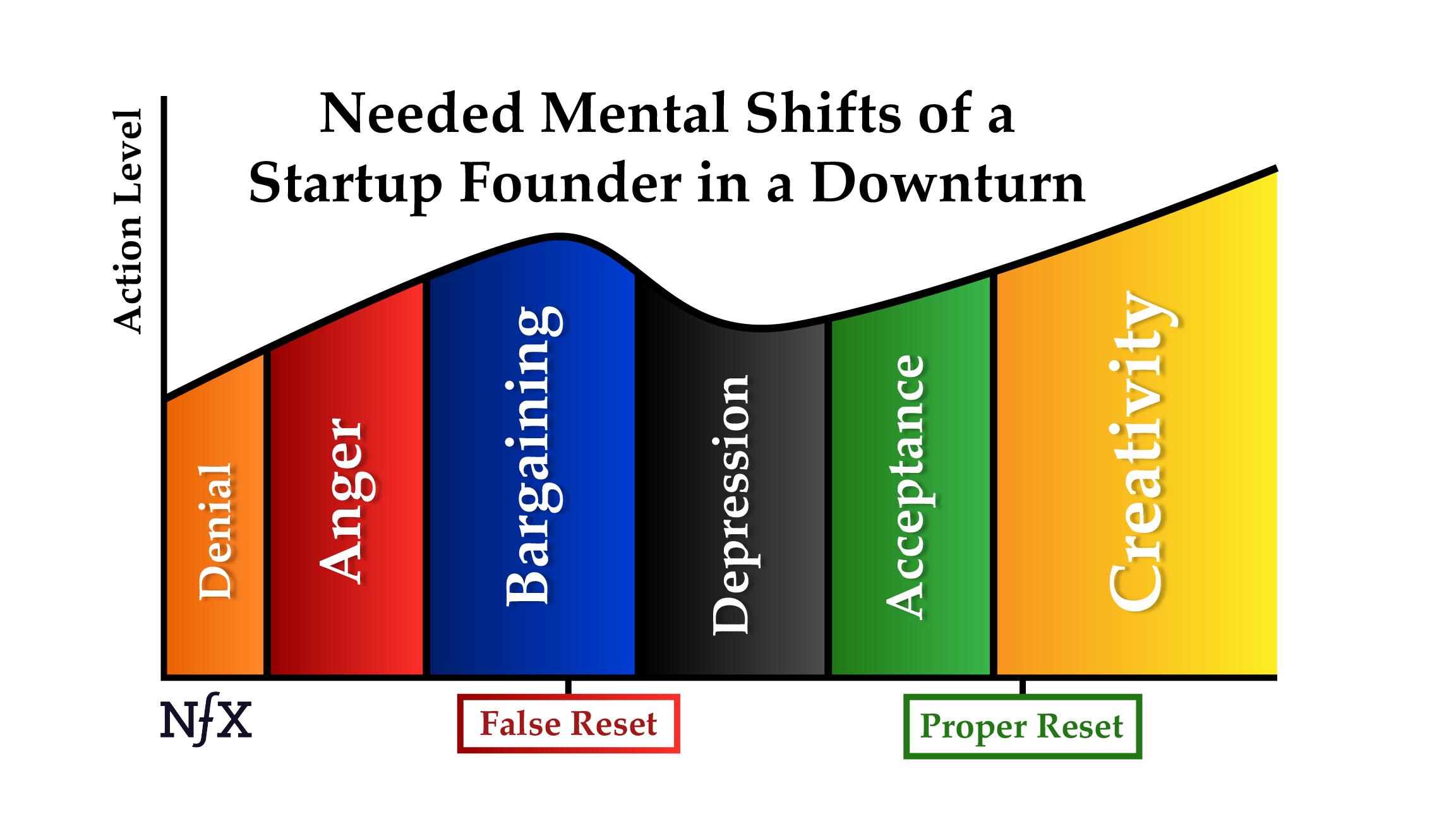 In a downturn, the wise Founder will know the first action needed is a pivot of the mind. The CEO’s psychology is the greatest point of leverage in a company’s success or failure.

Leading my own VC-backed tech startups successfully through the 2000 and 2008 downturns, I’ve noted how great Founders shift their mindsets and psychology during a downturn in ways that drive survival and success.

Executing mind shifts can be hard work because typically, you must go against your optimistic instincts as a Founder. You must also often overcome the impulses of your employees and/or board.

We’ve noted 8 mind shifts of CEOs of companies that survived, then thrived, despite downturns. Once you have mastered your capacity for these mind shifts, however, you will be well-positioned to manage through nearly any period of crisis that might come ahead.

Mind Shift #1: Realize That Your Own Psychology Will Make Or Break Your Company

It’s all in your mind is a cliche. Like many cliches, it’s true. Tending to the Founder’s psychology is one of the things people don’t talk about except in private conversations with trusted mentors or co-founders. During the darkest days, a Founder needs to seek advice and time with the people that care about her or him the most and to establish a firm grip on their own mind.

You, like all other Founders, will need to go through the 5 stages of grief, and out into creativity once again. 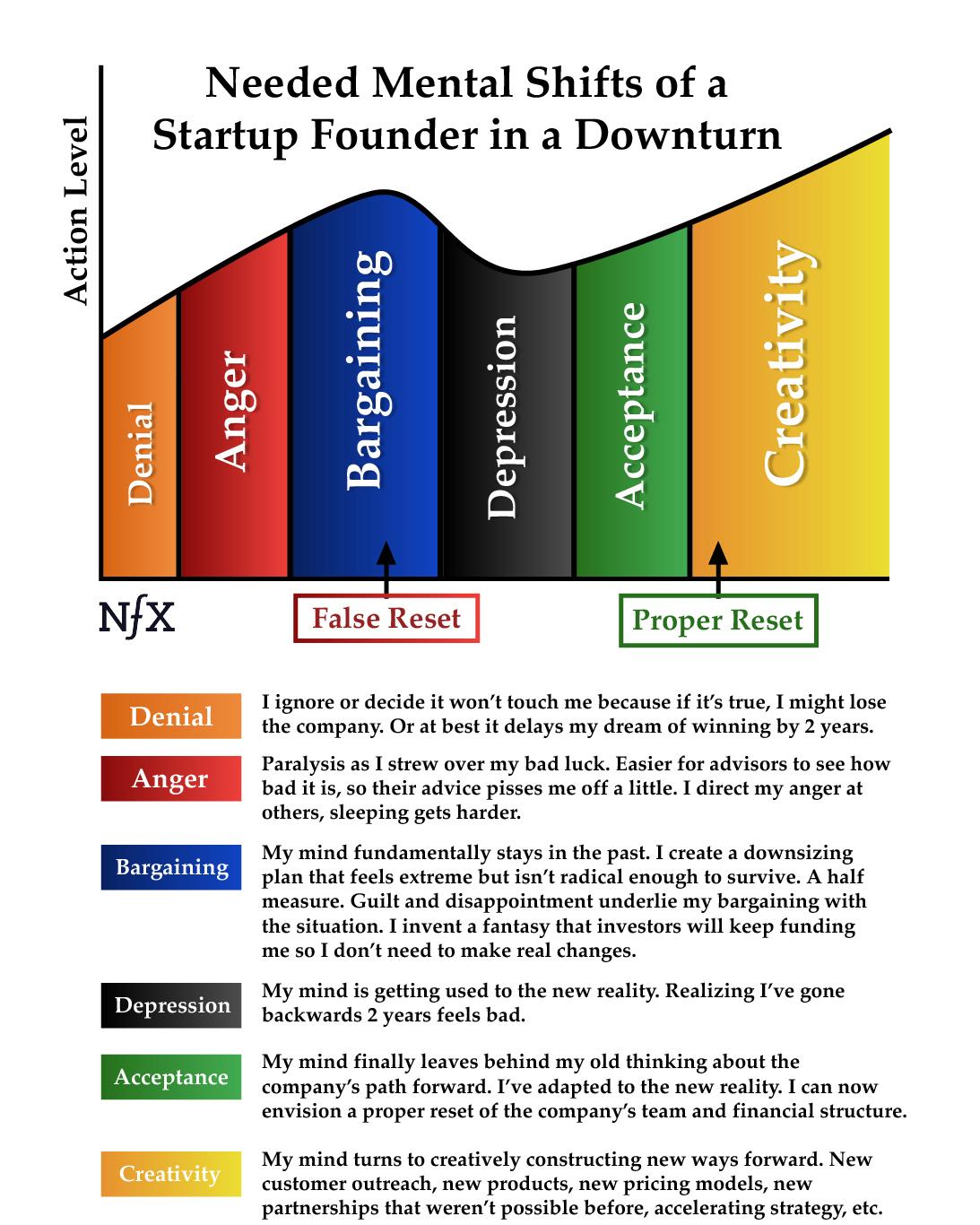 It’s freeing to understand how your mind reacts to crisis because it gives you a roadmap. You can choose to move through your adjustment quickly or slowly but quickly is better. I’ve seen Founders grasp this fact and morph from borderline manic to Zen. Once you realize that your psychology and the mastery of your mind may be the most important thing you can bring to the table, the fog lifts.

This, in turn, gives your employees, your investors, and your customers confidence that everything is going to work out.

Mind Shift #2: Acknowledge That It’s Worse Than You Think

After spending years focused on driving exponential growth, it’s typically hard to imagine the flip side, particularly for Founders, who need to be optimistic by nature. When something goes wrong, the problems compound such that nearly everything goes wrong at once, and the downslope is far steeper than human minds easily comprehend, including yours. So take your initial estimates of how long it will take for your sales to recover when you will be able to raise capital again, etc. — and double or triple your estimate.

Get that you are returning to your earlier company stage, so your thinking needs to return there, also. For example, if you’re a post-Series A company, you should accept that you’re now a seed-stage company again. Return your mind to that way of thinking and those priorities.

Mind Shift #3: From Playing to Win to Playing Not to Lose

In a nasty downturn, you have to execute a mind shift from playing to win to playing not to lose. Only once you nail survival can you switch back to win mode.

Former Oracle CFO Jeff Epstein gives a great analogy: “It’s like you are running a marathon with 1,000 other people and you’re in the lead. Then a truck hits you out of nowhere. You are sitting on the curb bloody and broken, others are still running, and your fighting instinct tells you to get up and finish and win the race. But what you really need to do is go to the hospital to heal, and look forward to running the race next year. ” Jeff’s right. You can win the race in the future. But no one is going to win the race right after the crash. So make the mental shift from winning to surviving and living to fight another day.

Mentally leaning into the crisis certainly helps you move more quickly from denial to acceptance and onto creativity.

Further, there’s a tactical reason to lean in. Crisis gives you a great advantage. It aligns all the stakeholders in your company and lets you cut through any B.S. that might have been slowing you down before. That’s where we get the phrase “Never let a good crisis go to waste” from Churchill.

When there is a visible and agreed upon external crisis, ambient friction melts away. Your employees care less about internal politics that don’t drive sales or cut costs. Your board rallies around you to save their investment. Your vendors and contractors bend over backward to overdeliver. Your loyal customers want you to survive because they need your service.

When I was running my companies through two recessions, I was always struck by how most interactions became more pleasant. Crisis crystalizes relationships to focus on what’s important and to drive towards a singular outcome — survival — and everyone will make adjustments they wouldn’t have considered before.

In times of ambiguity and dislocation, fear can take over. Even exceptional employees get disoriented and confused. They may become paralyzed.

Founders can best prevent this from happening by shifting their mindset back to the mission that got them started on this journey in the first place. They should find themselves back at the office (or the home office) recommitting to their mission — even if there is only one week of money left in the bank. Because it’s what they want to be doing no matter what, regardless of the money. Lead with that spirit, and the team and board will follow.

Mind Shift #6: Return to Creativity to Find The Fast-Moving Water

Finding fast-moving water in your market is even more crucial during a crisis.
In his essay on managing through crisis, my Partner Pete Flint, detailed how Trulia found fast-moving water during the 2008 recession by offering services for people buying and selling properties out of bankruptcy. Great Founders use the opportunity of a crisis to shift the focus of their company towards (often emerging) areas of greater energy and market demand. Finding the fast-moving water is mainly dependent on the ability of the Founder to make the mind shift to creativity and shift the focus of the company and rally the troops to meet the need.

In the 9/11 crisis, a friend Rich Korhammer was running a company called Lava Trading. Their offices were in the World Trade Center. 65% of the 80 person team was killed that day. Rich happened to be next door at a meeting and survived. He met with the remaining team the next day in New Jersey at the office where they had backups of their software and data. He stood up in front of his employees and told them that in honor of their fallen teammates, they would help get America back to business by being the first company to provide high-speed trading to NASDAQ when the market reopened. Everyone there knew it would be a tremendous lift. The company went overnight from moving 1% of NASDAQ transactions to moving 10+% of NASDAQ transactions. The CEO later sold the company for $600 million — primarily because he had successfully found and tapped the energy from fast-moving water.

Bill Rodgers won the Boston Marathon and New York Marathon four times each. Rodgers attributed his success to a simple trick: he ran harder on the downhills than on the uphills. His magical insight? Runners tend to push hard to get up a hill but then let up once they go over the peak. They often expend energy trying to slow their descent. Rodgers took the opposite approach. “I always remind myself to lean forward and take advantage of gravity,” said Rodgers.

This is true in times of crisis for startups as well. Great Founders find ways to return to creativity sooner than others. They then push harder and take advantage of gravity to put distance between themselves and the competition. Finding places to push where maybe you previously would have coasted aren’t always obvious. Maybe this means doubling down on sales training for your highest performing account executives — counter-intuitive but possibly high leverage. Perhaps this means pushing hard to put up more blog content for inbound or redesigning marketplace dynamics to reduce transaction friction (even though transaction volumes were way off). These are areas where you might coast during a crisis. Why train the best-performing salespeople? Who needs another blog post? Why make it easier to transact when no one is buying? But these are all the little steps that can add up to help iconic companies gain ground on their rivals.

Mind Shift #8: Saying “Screw It!” And Doing Something Counter-Intuitive and Creative

At multiple points in my career as a Founder and CEO, I have had what I call “Screw it!” moments, where something I did that would be ill-advised in normal times, proved to be game-changing in tougher times. One time, when I was in the middle of fundraising, I had received numerous rejections. One from August Capital particularly bothered me. I was annoyed, frustrated and tired. So I wrote an angry email rebutting all the points August had made in their rejection letter. A response from the VC came immediately. “You made some pretty interesting points. I’d like to meet and talk about your company.” The well-worn playbook says take any VC rejection in stride and never tell a VC they made a mistake. But I had nothing to lose and so the risks of doing something irrational were relatively small. Nasty downturns are a great time to permit yourself to say “Screw It!” and try something unorthodox.

The Ultimate Mind Shift Is To See Reality But Still Believe

Great Founders can fully understand the reality of their situations and still maintain enthusiasm. I always managed to do this even though it was beyond hope. At my first company, Tickle, in 2000, the investors stopped coming to board meetings. They had written us off as roadkill. That didn’t stop us. We kept holding board meetings and taking them seriously. We moved through our grief psychology into creativity, and got on with it.

It worked out. We grew to 100 employees and 150M users, then sold the company for over $100M+ after we successfully made it through the great DotCom Crash to profitability. All of this was made possible by the mental shifts I and my co-founders were able to make — thanks, in large part to my mentors, co-founders, and my wife’s help. I recommitted to our Mission. Yes, I did some irrational things. But in hindsight, some of them were effective and may have saved the company.

Those periods, while hard, were some of the most rewarding of my life. A crisis is a time that wakes you up and gives you the white space to create something unique and amazing.