Why Web3 Hiring Is Unique 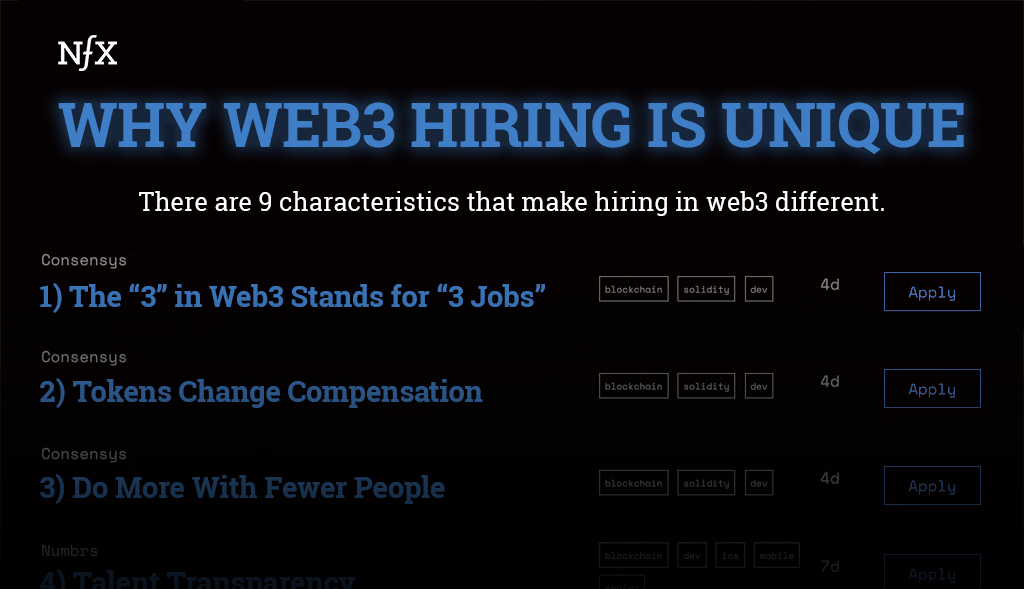 Hiring is and always has been hard. From web1 to web2 to web3, creating great teams of people is one of the most important jobs of the early-stage Founder.

But hiring in web3 is unique.

When working with the Founders of our portfolio companies, we’ve seen 9 characteristics that make hiring in web3 different. Whether they present an advantage or a vulnerability is for you to decide.

Land a role at Airbnb, Netflix, Tesla, Salesforce, and that’s your job, right? You don’t expect to also work 2 other places at the same time. Even extreme hustlers only manage to moonlight on a project or two in addition to their full time jobs.

But having one job in web3 is increasingly viewed as old school. I enjoyed this tweet saying that the “3” in web3 stood for three jobs. On one hand, I think that’s great. Contributing to a lot of projects accelerates learning and networks. It gives you broad scope and perspective on the whole ecosystem.

On the other hand, for a Founder looking to hire your initial few hires, or even beyond that, you want everyone on your team to be maniacally focused on your thing. You want them thinking and dreaming about your company, your product, and your problems 24/7.

The new idea that having just one job in web3 is passe or limiting, can make it harder to get people to commit to you.

Tokens and networks have also changed the dynamic of hiring and retaining. As a Founder of one of these projects or protocols, you are effectively operating a public company in some sense, but at the series A, B, or C stage. In a public company, your stock price changes by the minute and your employee sentiment changes by the minute accordingly. In a token network or project, the same thing goes. There are a few repercussions that result from this.

One is that there’s a faster path to liquidity. Even with vesting schedules, when tokens vest, you can liquidate them sooner than you can in web2 or more traditional companies.

The other key is managing expectations and sentiment around the constantly fluctuating token price.

Tokens often matter more to web3 talent, because that’s where the liquidity and asymmetric outcomes have been. We’re seeing a generation being brought up on monopoly money. Old-world assets are a lot less appealing.

To properly anticipate the future of Bitcoin, and to think in first principles, you should be able to recognize the specific network effects already at work in it. You should also get a sense for how those network effects reinforce each other, because 2+2=5 in this case.

This is the central nfx of Bitcoin. The belief network effect is something you can best see with gold, Bitcoin and religion.

3. Do More With Fewer People

This isn’t true for all web3 companies, because there’s a range, but for some projects and companies composability is a real thing. There are a lot of pieces out there that you can copy and paste. You can leverage pieces that were already open-sourced, which means that your org chart probably looks different than a traditional company’s org chart. You can do more, faster, with fewer people. If you don’t have a traditional org chart, what are all of the pieces that you need to achieve the same outcome as a company that does?

Another thing to consider is that talent in web3 is transparent. Top performers are visible from their activity on GitHub or Twitter, and have also amassed an on-chain resume of various activities. Nearly everything is open source and community-based. There’s a public track record and more “game film” for employers to review. So unlike with traditional resumes, you can’t hide your past as an employee or fudge the truth.

This verifiable reputation system helps make it easy to identify talent, which is good. But it also makes it easier for other projects to poach your team’s talent. Yet another double-edged sword.

Hiring non-developer, crypto-literate talent in web3 is uniquely challenging. Developers are hard to hire. They’re always hard to hire, but I actually believe that it’s harder to find crypto-literate non-technical talent right now. Whether it’s crypto-literate designers, lawyers, accountants, product managers, or communications experts, finding people across a variety of skill sets, but also with a baseline understanding of web3 is really challenging. This is largely because the way to really get crypto and web3 is to “do it” – build in it, transact, mint, publish, etc. Which still requires some technical know-how as a gating factor.

6. Web3 Hiring Is An Ultimate Meritocracy

By contrast, web3 hires can come from anywhere around the world and they can be 14 or 74 years old. That’s great. But you have this whole ocean to boil, from a recruiting perspective, which is a unique challenge. You need to develop a very clear framework for the sort of person and experience you are looking for, and the sort of contributor you want them to be – both to your project and to your culture.

7. Hiring In The Goldilocks Zone

You also need to find the right balance between classical training and being open-minded to this new world. It’s like a Goldilocks problem. Web3 requires skills from the before-times, like good product thinking or how to write quality code. But at the same time, you need to have an open mind for things that haven’t been done before.

This isn’t necessarily a popular opinion, but I don’t think remote is always the right answer. Remote is a trend beyond web3, but my hypothesis is that a greater percentage of web3 companies are remote teams.

There are a lot of benefits of remote. But there’s the idea phase and there’s the execution phase in any startup. I believe that in the idea phase, there’s a lot of value in sitting on top of each other and having a whiteboard and coming up with crazy ideas on your way to the bathroom or at lunch.

You also have to consider it from a recruiting perspective. While helpful in some cases, remote may turn other candidates away. I had an engineer come to me who wanted to join a web3 startup but also wanted to be on a team that was in the same physical location. That’s basically a null set.

Remote can be good or bad. As with everything else, it depends on your approach. Not all things are binary. You can find the right mix for your situation.

Recruiting money and resources used to be spent on LinkedIn, AngelList, and college recruiting fairs. That’s not where talent is coming from anymore. Now it’s Discord, Twitter, hackathons and conferences. But recruiters can’t easily engage top talent in these new web3 communities, because you typically can’t pay for access. You can’t be an outsider coming in with a fancy suit but speaking all the wrong language. You need to genuinely engage and contribute to the community. It’s just different.

You’ll need to update your recruiting playbooks and sourcing strategies. Over time, we will develop new tools and tactics, but you’ll need to find a bridge over to web3-native talent in the meantime.

We just made a list so that you will realize, if you hadn’t already, that you need to update your mental models about hiring for your startup. You can figure out which new attributes you can leverage. Some of them can give you a unique edge. But also be careful of the vulnerabilities you need to make new plans for.