What Doesn’t Kill You, Mutates And Tries Again 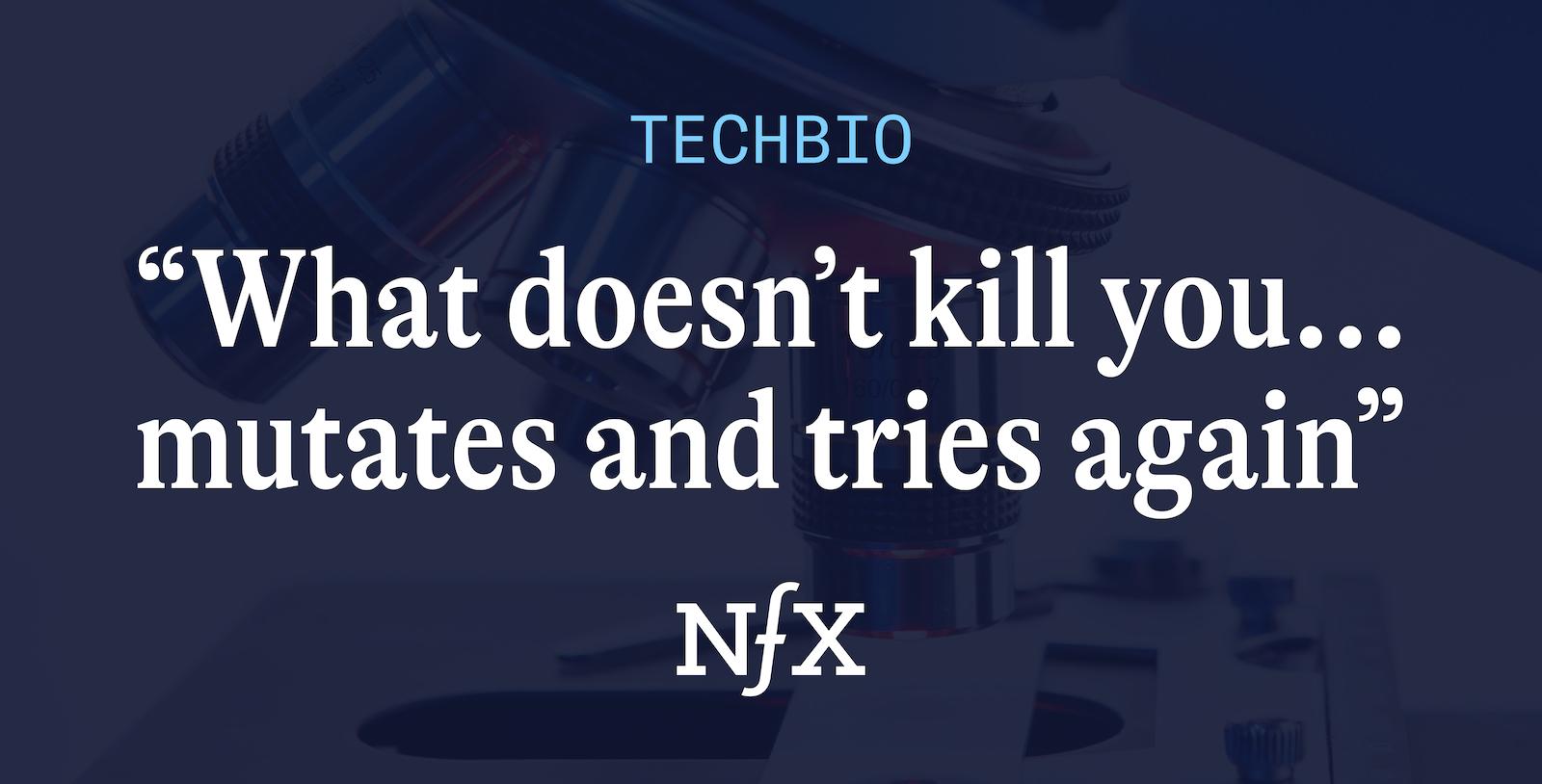 Viruses mutate. Cancers become resistant to medication. How do you tackle a problem where the goalposts are constantly moving?

You do it with a strong platform that attacks the root cause of resistance. At NFXBio we’re interested in core biological technologies that can move as fast as nature.

That’s why we sat down with two founders building those kinds of TechBio companies: Jacob Glanville, founder of Centivax, and Nicholas Goldner, founder of resistanceBio. We wanted to talk through how they define a platform, and how they approach three important topics:

How to Approach a Constantly Changing Problem:

A techbio platform is a core biological technology, where the IP gives teams the potential to create many applications (depending on the company, those could be therapies, different diagnostics, chemicals, or even food).

Let’s look at how Centivax is using this approach to tackle a problem with moving goalposts: quickly-mutating pathogens (like the flu or COVID) that can eventually evade vaccines.

Centivax’s IP core comes from a beautiful piece of biological technology. Twenty years ago, scientists noticed that rapidly mutating viruses have weak points that don’t mutate over time. Humans produce huge numbers of antibodies, but some people, by chance, produce antibodies that target those sites. Those people, in theory, are better protected against all the past and future versions of a pathogen.

The trick is getting our immune systems to focus on those conserved sites and produce broadly neutralizing antibodies, rather than focusing on the constantly mutating sites. Centivax’s core IP is a solution to that “focusing” problem. The company takes an evolutionary snapshot of many proteins, combines, then dilutes them so that only the shared site (the conserved site) is at a high enough concentration to trigger the body’s defenses.
Immediately, the Centivax team investigated how this IP could tackle more than just one indication:

There’s like 18 pathogens we can think of right now that are really important. We even, to test it, went all the way out to snake venom. We took snake venom from 14 species from all around the globe and we produced this ultra broad response. That really speaks to the breadth and the power of the platform.

Centivax is also taking it one step further. They ensured that their core IP is tractable – easily manipulated. Centivax is ensuring that its feasible to manufacture at the scale needed to tackle their target markets. (You can’t create a universal vaccine that needs to reach millions of people if you can’t make it quickly, on widely available equipment).

As Jake put it:

Sometimes in synthetic biology, people come up with some cool thing, but you’re never gonna construct it. It’s never gonna be stable in a syringe. You’re never gonna manufacture enough for it to matter, or it’s gonna be crazy expensive. Whereas our technology, the power of it is that we have a lot of flexibility to bioengineer it.

resistanceBio has also built a platform around their own IP core, called ResCu. ResCu allows them to create a theater where the cancer reacts to a certain therapy and reveals the routes it will take to become resistant to that therapy. The company can build a clinical model of resistance pre-clinically, for any potential treatment, that’s actually similar to what happens in a patient’s body.

We went back and looked at all these different assumptions. We said, how can we make a system that’s as close to the human environment as possible? How can we create something that takes into account the entirety of a cancer patient’s treatment – they don’t stop getting drugs after a seven days, but we develop drugs in the seven day timeframe.

The company can apply the same ResCu system to every drug – those in development and those that already exist. In either case, it creates a model of each specific drug-caused resistance that’s as close to what actually happens in the human body as possible.

Over time, resistanceBio can create an entire atlas of common resistance pathways between cancers and drugs that could lead to new blockbuster treatments.

One of the biggest pain points for our companies is choosing what indications to pursue first. We have a high-level guide to that question here, but here are two approaches that our founders have used before.

The advice from resistanceBio: listen to what the market is telling you. Here’s Nick’s experience:

We didn’t think what we initially offered was cool enough. And then we started talking to our pharma partners. They were like, wait! You can create a cancer resistance cell line?

We had to listen to our customers and our customers told us: this is what we want. This is where your technology fits in. All of the stuff that we wanna do later on still fits into the process. We had to figure out where we were going to sell this technology first. And once we found that access point, we were able to then develop those technologies…

I remember sitting in a board meeting with Nick and saying: “pharma companies want to take your money. Why aren’t you letting them do it?”

The customer gave resistanceBio a clear signal as to how to develop their first product.

Sometimes, the market is telling you that there are multiple big targets to go after right away. In Centivax’s case they’re focusing on creating universal flu vaccines, but they could tackle a huge variety of pathogens. They chose their first project strategically. The playbook they are developing now can be easily transferred over to at least two other impactful targets: HIV and COVID.

Let’s talk about the dark side: business models.

Platforms can pursue vertical or horizontal business models. They can develop their own products, they can partner with others, or they can monetize the platform itself (as a service).

Centivax has taken a vertical approach first. Developing a vaccine is a fairly straightforward trial process. But they have a strategy that doesn’t leave any learning on the table, and generates revenue earlier in the process.

Centivax looked for synergies between different indications they might pursue. One jumped out: pigs get the same influenza humans do, and tend to be far more accurate animal models than mice. The animal vaccine market is easier to access in the short term, but helps Centivax develop their technology for human vaccine projects in the long term. As Jake explained:

Another part of our model is that there are veterinary applications for some of our vaccines. For example, pigs also get influenza. And it’s a $180 million per year market.

Now, I don’t want to turn into a veterinary vaccine producing company. My focus is on humans…[but] that’s helpful to us. We are aiming to license that vaccine out to veterinary groups. That’s an earlier source of revenue for us. It’s also just a great opportunity to establish our broad spectrum vaccine technology out and get it commercialized in a mass way.

resistanceBio has taken the horizontal approach. They realized the best option for their technology was to partner with existing pharmaceutical companies looking to develop new therapies, or improve existing ones.

What we realized was there are just so many cancer types out there and there are so many targets, it was a selfish decision to only use this platform internally. It has so many applications to all the different compounds that are out there. We really wanted to make sure we were partnering with companies so they understood all the landmines in front of their compound…

They could add more value to customers working horizontally – generating early revenue, and helping tackle many different forms of treatment resistant cancer with partners. (Though they could certainly go vertical in the future.)

The conditions for fundraising right now can feel challenging. Both founders found that their previous business experience (even in the non-bio world) helped them navigate the pitch process. Jake learned business from his father’s hotel and restaurant in Guatemala. Nick cut his teeth as a furniture salesman during the 2008-2009 downturn.

No matter what field you’re in, 80% of the skills of running a company translate over. Investors will ask questions about your technology – but they also want to see if you can really run a company. Here’s Jake’s experience:

Business translates everywhere. Can you build it? Can you get people to show up to buy it? Do you have the right group of people and are they doing the right things? How are you gonna handle it when things go wrong?

I think those [were the main questions investors asked]. And is it gonna make money? Have you priced everything successfully? Have you expressly judged that market?

Another important takeaway: you have to really understand who you are pitching to. As Nick explains:

What [furniture sales] really taught me was that you have to get the right message to the right person. And if you’re not aligned on what their objectives are, and what their pain point is,it’s gonna be really difficult to sell something. Whether it’s VCs or partners or whoever.

When I was running my company, Genome Compiler, I made 148 different versions of my pitch deck over the years. Looking back with my investor perspective, they all seem bad. Now, as an investor, I can tell you there just a few central questions you should answer:

No one can tell you what it’s like to build a TechBio company right now, other than the founders and investors making it happen.

You can hear the whole conversation with our founders here.

And if you’re the right team, with the right defensible magic contact us at NFXBio.

Stay up to speed
Weekly resources, news, and stories. Be the first to know and get insider tips.
208,936 startups read our weekly essays.
Connect with
Omri Amirav-Drory, Ph.D.