A Mammoth Becomes A Unicorn: Inside a Scientist-Founder’s Journey from Pre-Seed to Series D

NFX portfolio company Mammoth Biosciences recently announced their series C and D at over $1B valuation.  There is so much to learn from their path from the lab to unicorn status.

We led Mammoth’s Pre-Seed and Seed rounds and co-led the Series A. We’ve invested in every round along their journey, including today’ Series D.  We even helped them name the company “Mammoth.” Keep reading for that story.

So today we take an inside look with Mammoth’s Founder-CEO Trevor Martin at his journey from idea to unicorn — for the benefit of up-and-coming Scientist-Founders worldwide.

Mammoth was started 4 years ago, cofounded by then-28-year-old CEO Trevor Martin, Janice Chen, Lucas Harrington, and Nobel Prize winner and CRISPR pioneer Jennifer Doudna. It was spun out of Jennifer’s lab at UC Berkeley. The biotech company is building the next generation of CRISPR products and platform to cure and detect disease.

Mammoth is also the poster child for the NFX strategy of using network effects to build bio platforms — this approach to building tech-bio businesses should allow them to get 10x the size of a normal bio company. It’s also a great example of how NFX Bio supports Scientist-Founders as they become great Founders and CEOs after they leave the lab.

At no other time in modern history has the need for science to lead our society toward a better future been more apparent and immense. We can meet this need by investing in the next generation of tech-bio companies like Mammoth.

Below are excerpts & insights from Trevor’s founder journey building a company that we’re going to be hearing about for many years to come.

The Early Days of Mammoth

“Back in 2016, when I was still working at Twist Bioscience, I was on the Stanford campus for a demo day. I saw then-27-year-old Trevor Martin present the idea for what would become Mammoth Biosciences. Trevor was just graduating with his Ph.D. in computational biology. I called up NFX’s James Currier and said: ‘You need to meet this guy, and fast.’” – Omri Amirav-Drory

Trevor: Jennifer and I co-founded Mammoth with 2 of the star graduate students from Jennifer’s lab — Janice Chen and Lucas Harrington. We had this idea that by leveraging the diversity of life and all the different organisms that are on this planet, you could find, characterize and develop novel CRISPR systems that go beyond the legacy ones like Cas9. And that’s an audacious goal. At the very beginning of the company, we already had one brand new product application that was enabled by some of these new proteins we were looking at, and that was CRISPR-based diagnostics.

So from day one, we had invented this entirely new field of products that couldn’t exist before. But we always knew that it wasn’t going to stop there. Just as with these new proteins, there’d be all sorts of new uses and applications in therapeutics as well.

The foundation of the company remains that CRISPR protein discovery and development pipeline — and that’s allowed us to build the largest toolbox of CRISPR proteins of any company on Earth. On top of that, we now build products in both diagnostics and in therapeutics as well with new properties that are unlocked by these proteins on the therapeutic side. That’s very unique for a biotech company to be kind of full stack and in both of those areas.

I remember walking around James’s neighborhood in Palo Alto, trying to find your garage, and I didn’t know anything about venture at the time. I was at the beginning of a very steep learning curve. If nothing else, I hope that that can show people that not being steeped in the venture industry or knowing anything about startups definitely should not be a barrier to taking a crack at building something meaningful and impactful.

Trevor: We came up with the name Mammoth in James’s garage. Somehow we got on animal names, and I think the Mammoth is definitely something that’s really come to characterize the company. It was also a bit cheeky in terms of being a twist on the idiom, like the elephant in the room, but it’s even bigger and you can’t ignore it. Also as a prophetic name — that this was going to be a Mammoth-sized company.

From Ph.D. to Founder & CEO

Trevor: A PhD program is usually four to five years, and I’ve been a CEO for four years now. To compare: I think actually in some ways a PhD can prepare you for a startup life in the sense that, a PhD is all about doing things that haven’t been done before and being able to deal with uncertainty and setbacks and there’s no textbook. We don’t know where something is headed. It could go many different directions. And, frankly, being comfortable with failure the first three years of your PhD, often people say that’s just where you learn how not to do things, for example. In a startup as well, definitely, a huge part of it, in my opinion, is being comfortable with failing or coming close to failing and persevering through that. I think that’s somewhere we’re actually, maybe it’s under-appreciated how much graduate school PhD training can actually be an advantage.

Of course, there are many things that you don’t know when you start off, which is where having really good advisors and mentors early on, like James and Omri, is critical to having success as a first-time Founder. It really comes down to finding and trusting people who have done it before, and that have seen successful journeys, and really being able to call them up any time.

Omri: I remember I saw a paper coming out of Jennifer Doudna’s lab using Crispr for diagnostics. I remember calling Trevor and saying: “Hey, you know, you have some money, go to Berkeley, get the IP out before somebody else wants to start a company around it. Because it’s a better way to solve the problem you’re trying to solve.” And he did.

Trevor: I think that a lot of people in Masters programs and PhD programs kind of self-select out: “Oh, I can’t possibly start a company.” Or they think there are too many barriers or something.

They shouldn’t just close the door to themselves. There is a very supportive community that wants to support graduate students and postdocs who are thinking about starting a company. You all — James and Omri — were really key for us in the early stage. I think that’s something that people don’t maybe expect or don’t fully appreciate, that there is actually a community and it’s not zero-sum. Suddenly you can see a path to applying the science and actually making it impact the world.

I feel like you almost owe it to yourself to really take a serious look at it. There are many cases where it doesn’t make sense to start a company, but I just wish that more people understood that it is a real path and that there is a real amount of support for that journey.

The community is where there’s a huge amount of potential that could be unlocked, if there were more advisors and mentors like Omri and James who were out there really helping people understand this is a path. Once we start seeing more success stories — and hopefully Mammoth can be a big part of that — I think it’s going to unlock that more and work to the benefit of society. I’m really excited to see more Scientist-Founders out there.

Science & Business is Not Either/Or

“Being good at aggregating and convening the right people is really what gives Founders confidence. If you have that platoon you can go out and take on the world. I remember Steve Jobs said the greatest product he ever made was the team he assembled to build the iPhone.” – James Currier

Trevor: I’m a huge believer that it really comes down to the team. Of course, especially in biotech, you want to have great technology and science, but I think that really at the core of any company are people that you enjoy working with and you can kind of ride or die with through a long journey.

We all started as scientists and most of the people at the company are scientists. But I think part of the secret sauce of Mammoth is this really great combination of scientists with also really experienced tech execs. It’s not like an either-or choice. You need both. That really gives you the best of both worlds and access to people who understand why things are done the way they are. You really need to understand the rules to break them, I think, especially in biotech.

Trevor: Growth takes a village. At Mammoth, we have a deep internal pipeline of products that we’re working on and really believe in — and then we’re also working with partners where we believe deeply that by working together, we can bring something to market quickly and effectively. Because even in a thousand years Mammoth alone would never be able to tackle every indication and every area that could be beneficial.

It’s almost like we have a societal responsibility to make sure that we are really working with others as well to get this technology to patients. So that’s why we also focus on this as a platform to really scale out the technology, get it out there into the world.

It’s an extremely exciting time in CRISPR, but at the same time, it’s still really early days. And I think that’s the best combination — when you’ve already seen this huge exponential curve, but you’re just at the first leg of it. It’s going to just be so impactful, for curing and diagnosing diseases.

There are very few things that are as rewarding as seeing a technology go from literally in the lab to getting closer and closer to actually having an impact. 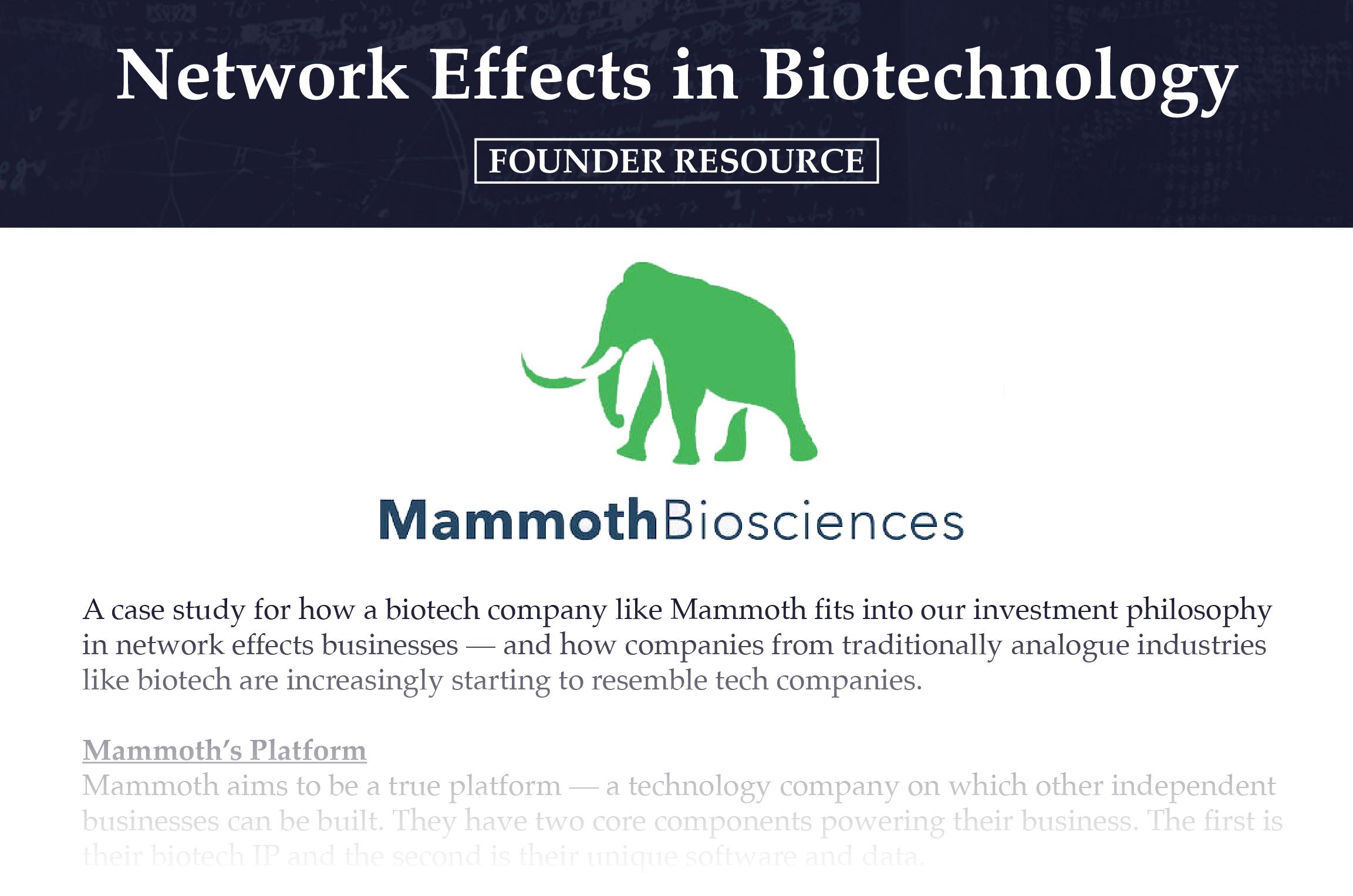 Series D and Beyond

Trevor: The whole field of synthetic biology, generally, and this idea of interacting with biology in this kind of programmatic way is definitely capturing the imagination and taking off. There’s the famous line “software eating the world.” But I think the message for the next decade is that that was just the appetizer — biology is really the main course here in terms of what can fundamentally transform the way we interact with the world.

Our Series D round is all about putting the pedal to the metal in terms of our programs, both in diagnostics and therapeutics, and bringing them to patients. I think that there’s a real potential for Mammoth to become the next great biotech company. And that’s not something that I say lightly — I really measure that in terms of patient impact.

It’s been an exciting 4 years, with an even more exciting 40 to come.