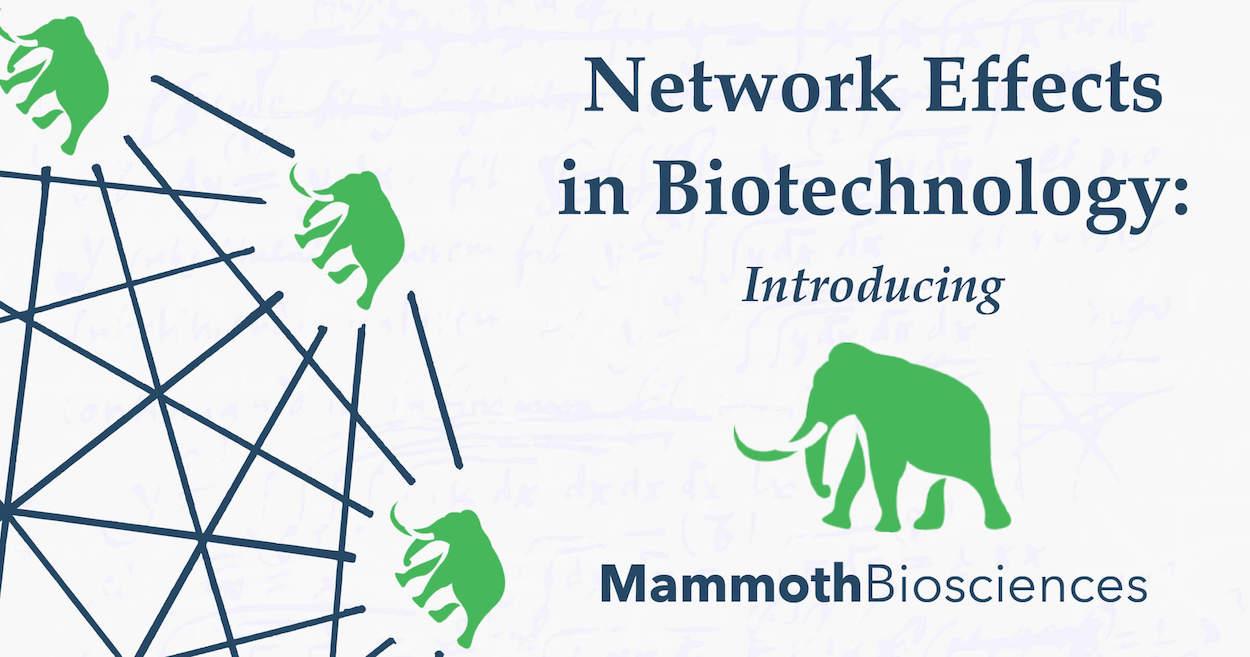 Today, Mammoth Biosciences announced their new CRISPR-based bio-development platform to the world. As the first investors in Mammoth, we wanted to share some of our thoughts around how a biotech company like Mammoth fits into our investment philosophy in network effects businesses — and how companies from traditionally analogue industries like biotech are increasingly starting to resemble tech companies.

Mammoth aims to be a true platform — a technology company on which other independent businesses can be built — so they need some serious core technology. In fact they have two core components powering their business. The first is their biotech IP and the second is their unique software and data.

On the biotech side, Mammoth has licensed key CRISPR intellectual property from UC Berkeley biotech labs like that of Dr. Jennifer Doudna. Dr. Doudna, who is widely known as the pioneer of CRISPR, co-founded Mammoth with a team of Stanford and Berkeley PhDs.

CRISPR operates like a “search engine for nucleic acids.” It allows for scanning RNA or DNA for specific nucleotide sequences. Cas proteins can be used to signal that the target genetic material has been detected. So far most of the buzz CRISPR has been getting is around therapeutic ideas like gene splicing and gene editing — cutting out and/or replacing targeted spots in genetic material.

Mammoth might do some of that in the future, but for now, in order to build out the platform as rapidly as possible, they are focusing on an approach that can more easily develop network effects: cheap, affordable, and rapid biosensing which has become feasible for the first time thanks to new Cas proteins that were invented recently.

The Cas protein discoveries have promising applications. Imagine one of those quick pregnancy tests you buy at the pharmacy, but instead of just pregnancy you could test for nearly anything. Applied to healthcare, you could detect the presence of flu, STD’s, cancers, TB, strep, etc. Applied to industry, you could test for biomaterial in oil, chemicals, and plastics. In agriculture you would be able to screen meat, fish, and every silo of grain both before and after shipping, or before pricing. You’d be able to do all this at room temperature, on site, in under an hour, with no special equipment.

Here’s how it works: you apply your sample to a disposable Mammoth card manufactured for the specific genetic sequence you’re testing for. After about 30 minutes, a color will appear on the card indicating whether that genetic sequence is present. You then securely upload an anonymous photo of the card to the Mammoth system through the Mammoth app on your phone, and the Mammoth system will return the confidential results back through the app within seconds.

The second piece of core tech Mammoth has is their software and database. More on this below.

Let’s walk through why Mammoth is so exciting from a business perspective. They have four defensibilities, including two network effects, available to them.

In this case, Mammoth is fortunate in that it has access to Berkeley CRISPR IP and will be developing its own IP in the years to come. Building the Mammoth business starts with IP and goes from there.

Here’s an initial picture of how Mammoth can build its defensibility:

A traditional software platform network effect has two-sides: developers and users with the platform in the middle.

Take iOS. When Apple first launched iOS, they made the first ~30 apps themselves to show the world what they were thinking. 18 months later, they opened up the platform to let an ecosystem of software developers use the iOS platform to both develop their applications and then to distribute them. The ecosystem benefits all developers and it benefits iOS at the same time.

Mammoth aims to do something similar for biotech. Mammoth will develop the first applications of the new CRISPR technology themselves, but later open up the platform to partners who are looking to develop specific biosensors (and down the line therapeutic techniques). This platform approach gives partners a legal, faster and more lucrative way to get access to the patented CRISPR technology of Mammoth, without which many new products would not be possible.

By facilitating a platform ecosystem, Mammoth will maximize the distribution of CRISPR technology, which is their overriding mission.

Mammoth benefits from this platform model because, by itself, it could not possibly design, manufacture and distribute all the possible applications the new CRISPR technology opens up. Mammoth, like Apple and any company before it, is naturally limited in resources, manpower, imagination and expertise. By facilitating a platform ecosystem, Mammoth will maximize the distribution of CRISPR technology, which is the overriding mission of the Founders. 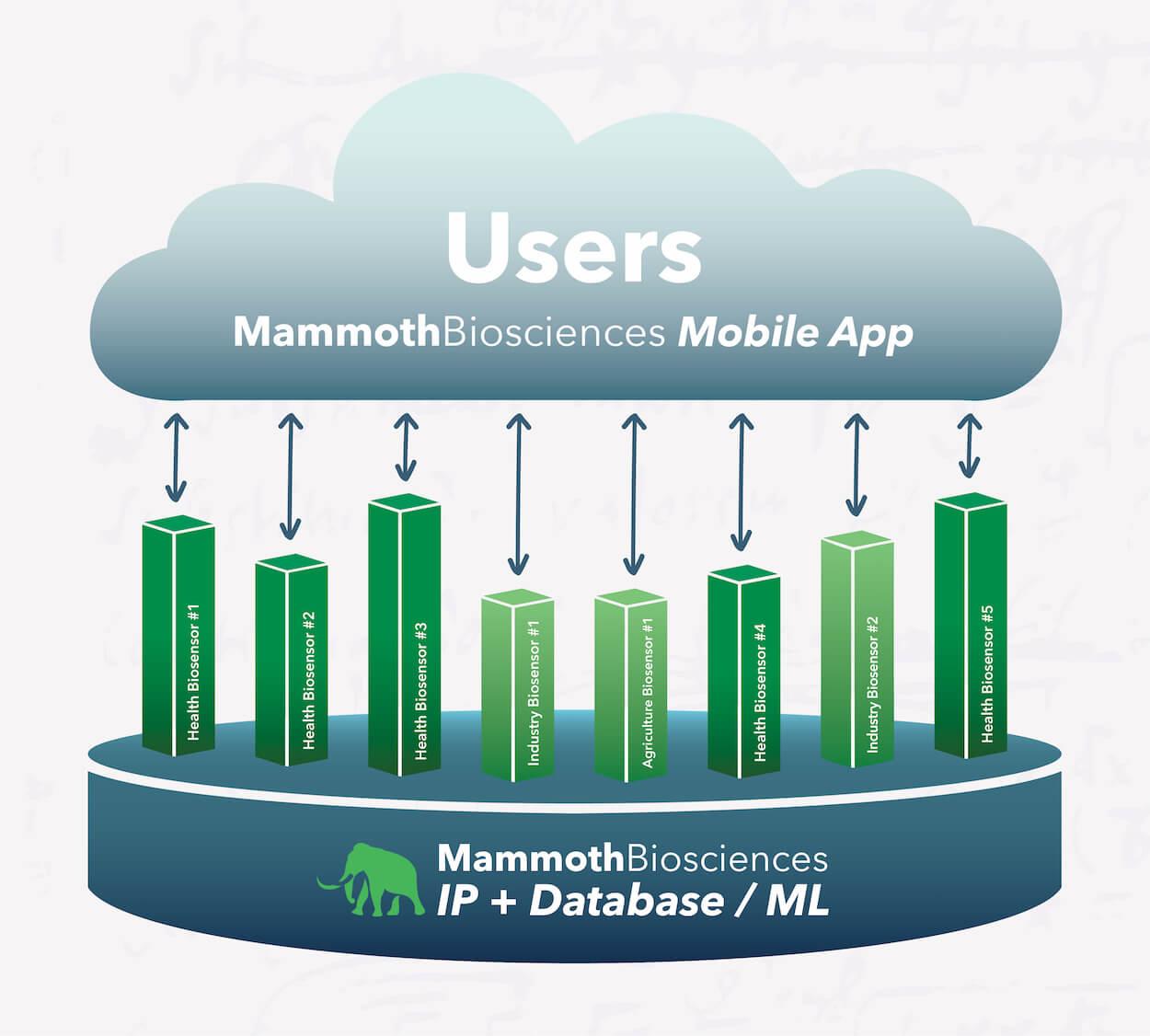 Using smartphones in the field with end users to send data for analysis and receive results opens up the possibility for Mammoth to establish a real-time data network effect. The possible applications for real-time, anonymized, and secure data from users in the presence of a disease could be truly groundbreaking for public health.

Imagine the epidemiological consequences of being able to see different strains of the flu in real time as they spread through different geographies, and better predict which strains should go into future flu shots. Timely warning systems could be developed to impact the spread of infectious diseases.

Users could better protect themselves from an outbreak. Imagine a heatmap of anonymized flu data that tells you which geographies have a high prevalence of different strains. Users could take preventative steps such as avoiding crowds, getting plenty of sleep, and getting vaccinated. In turn they’d contribute data back to their Mammoth apps by uploading tests results.

Real-time data network effects asymptote less, so the larger the user-base of Mammoth grows, the more valuable it will be for users to choose Mammoth powered products over competing offerings (similar to how Waze allows you to avoid bad traffic in real-time). This is potentially a classic network effect.

Because CRISPR works by programming nucleotide sequences into a cellular “search engine”, the same basic software and machine learning principles that enable Google to crawl and index the internet will allow CRISPR to ever more effectively “crawl” nucleic acids.

Thus, the more tests Mammoth does on sequence pairs, the more data Mammoth will have on how to make a maximally effective and cost-efficient test the next time. This process will be automated using machine learning, giving them increasing advantages in cost, quality and speed.

This is not a data network effect. It’s a scale effect.

As the case of Mammoth shows, the rules of the digital world are starting to apply across industries, particularly network effects and data scale effects.

The Biotech industry is first in line for this transformation, and Mammoth is poised to demonstrate what can be done.

Stay up to speed
Weekly resources, news, and stories. Be the first to know and get insider tips.
177,509 startups read our weekly essays.
James Currier
5-time founder. Expert on network effects.
Palo Alto, CA
TwitterSignalLinkedIn
More by James CurrierSee all 107

More on Network EffectsSee all 34

The Network Effects Of Bitcoin [An NFX Video]