Where to Invest in Network Effects

Facebook, Uber and WhatsApp: Why “Platform Applications” Are the Key to Cracking Open Massive Future Markets

Every new hardware technology platform — telephone, radio, TV, computers, mobile phones, Internet — brings a flood of new innovation and wealth-creation opportunities. But while the hardware platforms kick off these huge waves of value creation, they don’t capture the majority of the value. The applications built on top of them do.

The more precise insight is that the majority of the value is actually captured by a particular type of application, a rare type we call Platform Applications — applications that become platforms themselves.

New hardware platforms are clearly the main drivers for new innovation. Every new application we see around us is only made possible with fundamental new technologies.

The timeline below shows the emergence of the main tech hardware platforms of the 20th and the beginning of the 21st centuries.

Each new hardware platform gave rise to hardware companies leveraging the new fundamental technologies to grow fast and become huge (think RCA in the television era, IBM in computing, Compaq in personal computing, Cisco in Internet, and Nokia in mobile and Apple in smartphones). Each one of these companies was ahead of the curve when a new hardware platform arrived, and they profited.

Interestingly, however, the majority of the financial value created by these innovations did not stay inside the hardware companies.

These companies were so focused on hardware that they did not play a significant role in where most value was created — the applications.

Applications are essentially the software that runs on top of the new tech platforms.

Once computing became available, databases, operating systems, and other applications emerged that really took advantage of the platforms to create new things you could do with the technology. These applications captured larger, more lasting pieces of the wealth created.

Once PCs were available, everyone could use word processing or spreadsheets. The Internet was the tech platform that made Google and Facebook possible.

Of course, not all applications are made equal. Some cater to valuable core needs of its customers, some to less valuable needs. Some serve broadly, others serve only a niche.

Historically, the early application companies on each new hardware platform capture the most valuable needs first. Let’s call these Main Applications. After a few years, new companies can find only smaller niche opportunities available, and investors are left investing in smaller market opportunities. 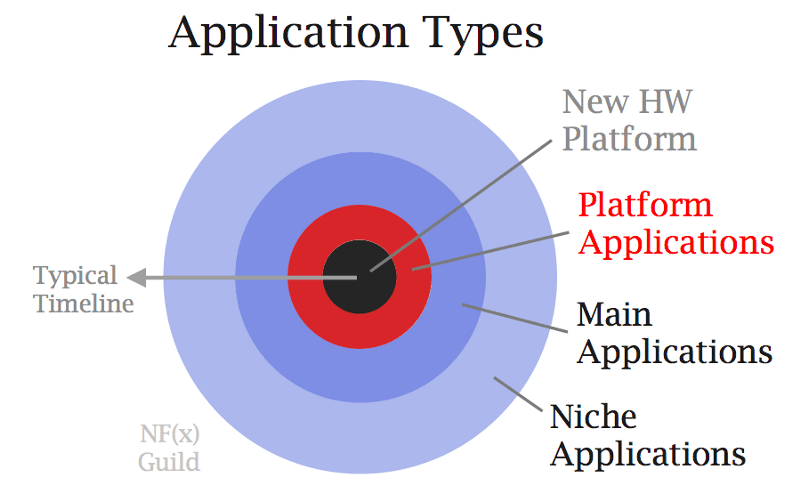 Platform Applications Are Where the Magic Happens

Platform applications are not hardware platforms but they behave like platforms themselves. Other companies are built on top of them or around them. They create their own ecosystem of value creation and capture a significant portion of that value.

It turns out most of the companies investors admire in tech follow this pattern of Platform Applications. Microsoft on PCs. Google and Facebook on the Internet. Uber, WeChat and WhatsApp on mobile.

So what allows Platform Applications to grow so fast and become so dominant?

The same thing which allows most companies in tech to become dominant.

What This Tells Us About the Future

So, as an entrepreneur or an investor today, where should you focus, given that history tells us that Internet and smartphone applications for consumers and small businesses are getting to the stage of mostly niche applications?

2) Pursue core innovation in laggard verticals. There are huge remaining vertical markets where, due to regulatory constraints or structural challenges, innovation has not yet caught up. These are, in order: enterprise, financial services, healthcare and government.

The diagram below shows the current state of each platform in each vertical (where green means the timing is right for investment). 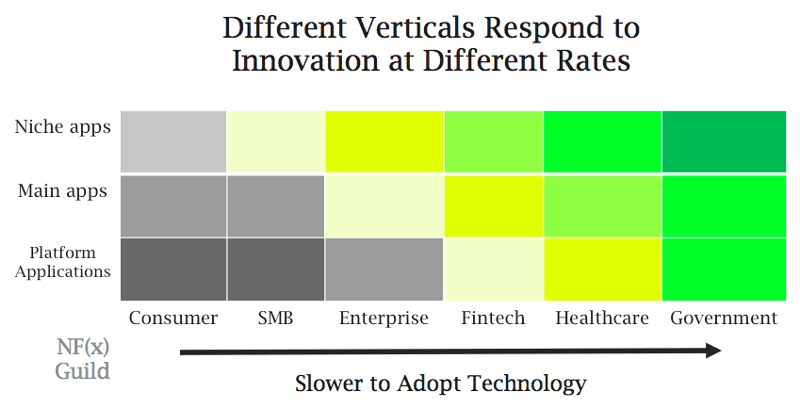 The exciting thing today is that there are multiple new hardware platforms emerging simultaneously. Augmented reality, virtual reality, artificial intelligence, the Internet of Things, robotics, blockchain, 3D printing, synthetic biology and others. It’s not clear which ones will be as big as the Internet or mobile, but as investors in innovation, it’s worth betting on all of them right now.

In these new platforms, as the ones before, the main prize will go to those who capture the network effect Platform Applications.

Guards at the Gate

These are exciting days in tech, but it’s not easy to break in: The current large tech companies are all too aware of these tech platform changes.

In the old days, none of the TV giants became significant players in the Internet world. Even Microsoft failed to translate its success in the PC operating system to the next platforms, Internet and smartphones.

For Facebook it’s FB Mobile, FB Messenger, WhatsApp, Instagram, and Occulus. For Google it’s Nest, DeepMind, Glass, self-driving cars and an investment in Magic Leap. A few billion dollars is a small price to pay not to miss the next platform revolution.

What’s different now is quite clear. In the past, the time between one revolution to another was long enough for the management teams of the past giants to become complacent and lose their paranoia. With new platforms coming faster, current management teams are still young, hungry and paranoid. They are buying or copying at unparalleled speed and at nearly any price.

As a founder, these are exciting times. There are many new platforms to work on that offer access to billions of customers in record time. But the incumbents are no longer complacent and slow — they are alert and fast. Now, more than ever, increasing speed and embedding network effects in the core of the business are critical in the hunt for the next platform applications.

Stay up to speed
Weekly resources, news, and stories. Be the first to know and get insider tips.
209,092 startups read our weekly essays.
Connect with
The NFX Team