The Future of Fundraising? What We Need to Fix About Token Investing 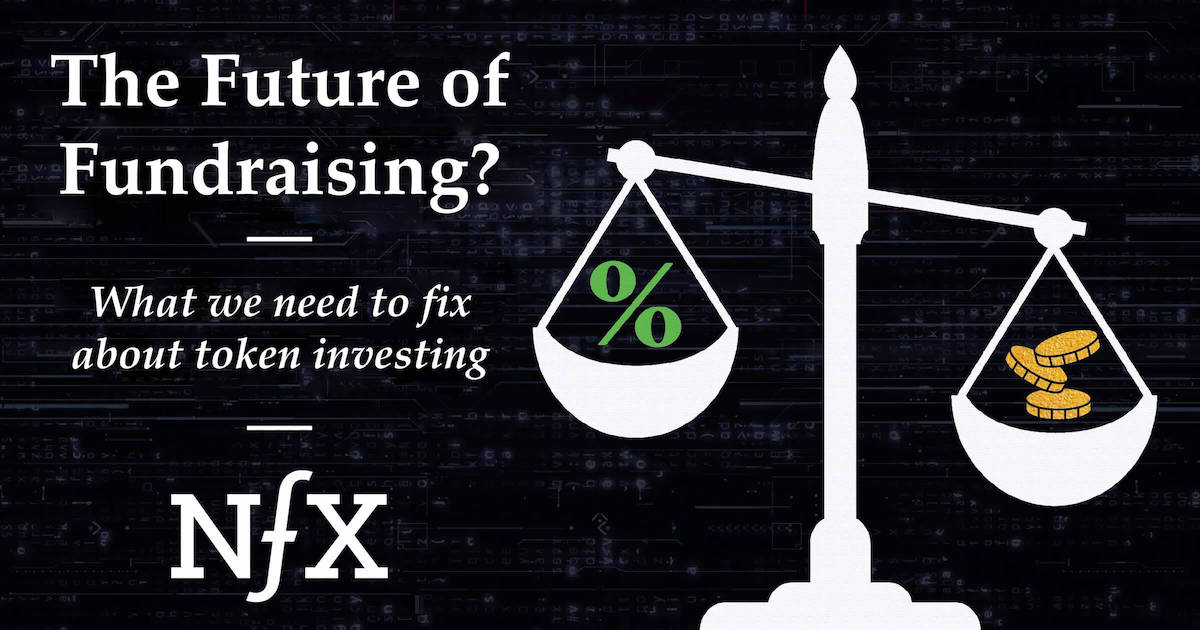 Now that the dust has settled from the frenzy of token investments, it’s time to evaluate what we learned. In the long term, we believe that token-funded startups will become more common and that traditional venture investors will have to be open to investing in tokens.

In this essay we’ll discuss four main insights that explain how we see token funding:

Despite our positive outlook, recent trends paint a troubled picture for token fundraising: the ICO market’s image has been tarnished by regulatory uncertainty, some disreputable sources of capital, and many tokens and dApps (decentralized applications) that have, thus far, failed to deliver. The failure rate of ICOs is also rising — even starting to surpass VC fundraising failure rates. Meanwhile, the popularity of token investment is actually rising. There were more than 3X as many ICOs in the first six months of 2018 alone as there were in all of 2017, and they raised over 4X more capital.

These conflicting signals have given rise to uncertainty and skepticism. But taking a long-term view, we think that tokens are here to stay as a fundraising method. We’ve seen several incarnations of digital early-stage investment before the arrival of tokens — from crowdfunding platforms like Kickstarter to equity crowdfunding market networks like AngelList. Tokens are part of a natural evolution in venture funding over the past decade towards greater speed, ease of transaction, increasing inclusion and alignment of stakeholders.

And though there are things we like and dislike about tokens, it seems likely that valuation gaps between token raises and equity raises will continue to narrow as regulatory frameworks become clearer. When this happens, investors positioned to benefit from token companies’ unique models will have an inherent advantage.

Security tokens are, at their core, digital securities on a blockchain infrastructure. Startups most commonly issue them in the form of ownership shares (equity) for fundraising purposes during a token sale. We believe these are far better than traditional equity and therefore —  unless regulation gets in the way — will become a preferred funding model in the future.

Imagine that when you invest in a company you get a token instead of a share certificate (digital or printed). The token has coded restrictions on transfer and sale that are agreed upon at the time of investment.

Because of these benefits, we can think of a tokenized security as an improved form of equity. In the not too distant future, many companies will issue security tokens instead of shares (assuming serious regulatory obstacles don’t arise).

Utility tokens, which give token holders the right to use a digital application or service or participate in its ecosystem, have a real usage —  hence their utility. They represent a bigger revolution than security tokens as they completely change the way different stakeholders (creators, backers and even customers) are compensated for their efforts or participation in any new dApp, and they offer a truly innovative form of kickstarting network effects.

Utility tokens benefit from similar advantages to security tokens (listed above) but, in addition, utility tokens can kickstart network effects by incentivizing platform use early on. In contrast to security tokens, they don’t represent rights to profits or other financial benefits, although some might purchase them in the hope that their value appreciates.

In its simplest form, the value of a utility token is tied to the value of the service its used for. In most cases, there are a limited number of tokens (which could be distributed in an ICO, airdropped, or mined). As usage of a platform grows, so does the price of its associated utility tokens. Utility tokens are also subject to token velocity, or the speed at which tokens change hands. The exception to this, as we saw in late 2017, is speculation, which can lead to inflated prices.

Blockchain-based marketplaces are a clear natural use case for utility tokens. Here, the dApp and token creator will rely on appreciation in token value to gain profit, as opposed to raking as much as possible from marketplace transactions (as centralized marketplaces do). The initial token sale will fund the development of the marketplace.

Utility tokens offer several key advantages in cases like this:

Taken together, these represent a real innovation in the way business creators and backers are compensated for their efforts. Utility tokens can improve the economics for both sides of a marketplace compared to traditional players. And while they’re a lot more complex from a regulatory perspective, they are truly an innovative form of funding and company building.

Utility tokens portend to change that by creating a situation where all parties win together. They promise greater alignment of incentives between the backers of the platform and the marketplace participants (both supply- and demand-side users).

Traditional marketplaces monetize via transaction fees, a.k.a. “rake”. Rake is non-trivial for users of existing, centralized online marketplaces (5% on Etsy, between 2-10% on eBay, and a whopping 30% or more on Uber, Google Play or the App Store). Rake heightens transaction costs for both buyers and sellers (not good for users) and also creates an incentive to disintermediate the marketplace whenever possible (not good for investors and platform developers) – a recent example of this disintermediation was the Fortnite release on Android which took place outside of the Google Play store.

But with tokenized marketplaces, the builders and backers of the platform can also rely on a new form of compensation: token value appreciation. In some cases, token value appreciation could even replace rake altogether (though recent examples show much lower rake rather than zero rake). Take WeMark, a blockchain-based marketplace for licensed photography and an NFX portfolio company. WeMark has close to a 0% commission on stock photos with their tokenized model. This is a huge difference from the 33% or more charged by centralized stock photo marketplaces like Adobe Stock.

Lastly, we should mention that although clearly in some tokenized marketplaces the payment token is also the utility token, there are other cases where the utility tokens are used just for utility (the right to participate in the marketplace or other forms of ensuring desired behavior from participants) and the payment is a general payment token like bitcoin. This is a new model we are seeing emerge.

We’ve written before about how 70% of the value from internet companies over the last 20 years or so came from network effects. But the new generation of blockchain companies take network technology one step further than those internet companies. As such, they have a lot of upside potential.

What we need to fix about tokens

Token models face some serious challenges at this early stage. Solutions for these problems must be found in order for tokens to make good on their potential.

The first drawback of the token model, and perhaps the most profound obstacle to wider adoption, is regulatory uncertainty and fraud.

At present, tokenized securities don’t typically carry any legal or enforceable rights to company revenue. And their regulatory status is in question: within the US and most Western countries, regulation could starkly limit the ability of non-accredited investors to participate in security token sales.

Additionally, utility tokens could be categorized as securities which would limit their usefulness because fewer people will be able to use them. SEC Chairman Jay Clayton warned in public statement late last year that:

… merely calling a token a ‘utility’ token or structuring it to provide some utility does not prevent the token from being a security.

As tokens enter the mainstream, regulators are paying close attention to the distinction between security and utility tokens. Whether a token counts as a security depends on whether there’s “an expectation of profits in a common enterprise”, where the profits come primarily from the efforts of others — the so-called Howey Test.

Because the value of a utility token will naturally appreciate with the value of the associated network, its regulatory status is murky and will vary on a case-by-case basis. We can expect more clarity on this as the space matures and the SEC issues more guidance (like last year’s report on the DAO).

It’s important to note, however, that direct investments in utility tokens by professional investors make them look a lot like securities, further complicating the already difficult issue of what to do with tokens that start as securities and transform into utilities. At present this remains unclear (to say the least). We believe, however, that regulatory clarity will arrive in the coming few years.

The “utility” of utility tokens must be real

It’s true that many new utility tokens aren’t really necessary — they don’t have actual utility. Instead, such tokens are created primarily as a means of fundraising. From an investor’s point of view, such “utility tokens” are an excessively high-risk investment. Although unnecessary utility tokens give entrepreneurs potential access to quick funding and flexibility, the investors and early adopters have very few protections. For investors, there’s not much upside to balance against the risks.

Traditional equity investments in startups take years to become liquid, so the price of the initial investment is discounted. Since tokens could be instantly liquid, there’s no need for such a discount. But early liquidity also comes with a major drawback: volatility.

Startups don’t always gain traction immediately: there can be many ups and downs. The loss of a single client or a sudden explosive growth in users can send misleading signals to investors. Too much early liquidity can amplify the natural volatility of an early-stage company to unmanageable levels.

It’s not always a good thing if the market capitalization of a company is swinging wildly up and down on a month-to-month basis. This is especially true for token-based companies, where volatility in token value not only affects the market cap, but also the price of tokens used as a means to take part in the network. As a result, the product itself becomes impossible to use since users won’t have a good understanding of the cost of using the platform.

Conflict between token and equity holders are dangerous

Some companies have a dual model, issuing both tokens and equity. These are typically companies which started the “normal” way and added an ICO later on, hoping to reap the benefits of a new fundraising channel, though some companies choose to pursue this model from inception (often called ‘double dip’ as investors get both equity and tokens).

In such companies, equity holders will want to impose as high of a rake as they can to capture higher revenues and profits. Token holders, however, will want the opposite: the lowest amount of friction possible to stimulate usage. These competing incentives could hamper the success of these hybrid companies, which can lead to extreme cases. For example, the equity of the company could get acquired and then the acquirer could then shut down the tokenized network, yielding significant profits for equity holders but spelling total disaster for the token holders. We have seen a few attempts to legally fix these conflicts but none seem satisfactory at this point. This must not be ignored by equity investors and token holders alike.

Over time, we can anticipate that startups will fall into three buckets:

As more and more new companies move into the latter two camps, a bigger share of venture capital will follow. Like most new technologies, token-based startups currently face challenges, but we’re optimistic that solutions to these challenges will be found. We’ll continue to keep a close eye on promising token-funded companies and expect to work with an increasing number as the space matures, especially those who use their tokens smartly to achieve stronger and faster network effects.