What Makes a Strong Startup CEO 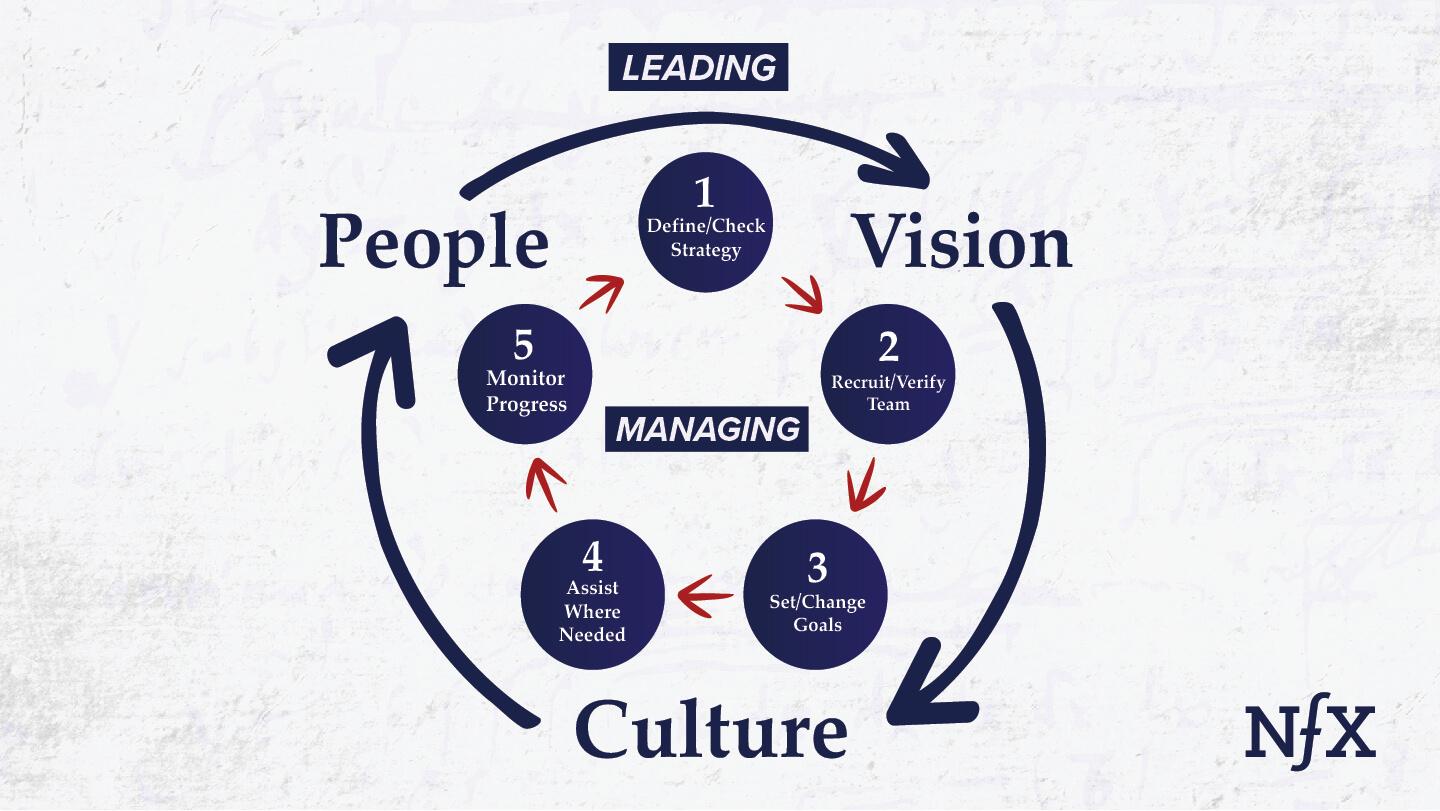 In all the companies I founded and invested in, one thing was always clear about leading a startup — it’s hard. Really hard.

Most Founders won’t come to their startups with years of leadership experience. Yet I’ve seen firsthand that there is a direct link between a Founder’s leadership skills and the outcome of their startup.

The CEO as Manager

This framework is the essence of a CEO’s responsibilities in managing their company. In a large company this cycle should be performed at least monthly given today’s fast-changing world; in a startup? Probably weekly. That’s the pace you want to aim for as a CEO.

The CEO as a Leader

Being a CEO is more than just management. While that core of management is important, and takes a lot of your time and effort, it’s also important not to get so busy and caught up in that cycle that you lose sight of other big-picture responsibilities.

I see the big-picture leadership responsibilities  — driving people, vision, and culture — as ‘orbiting’ the core CEO role as manager. 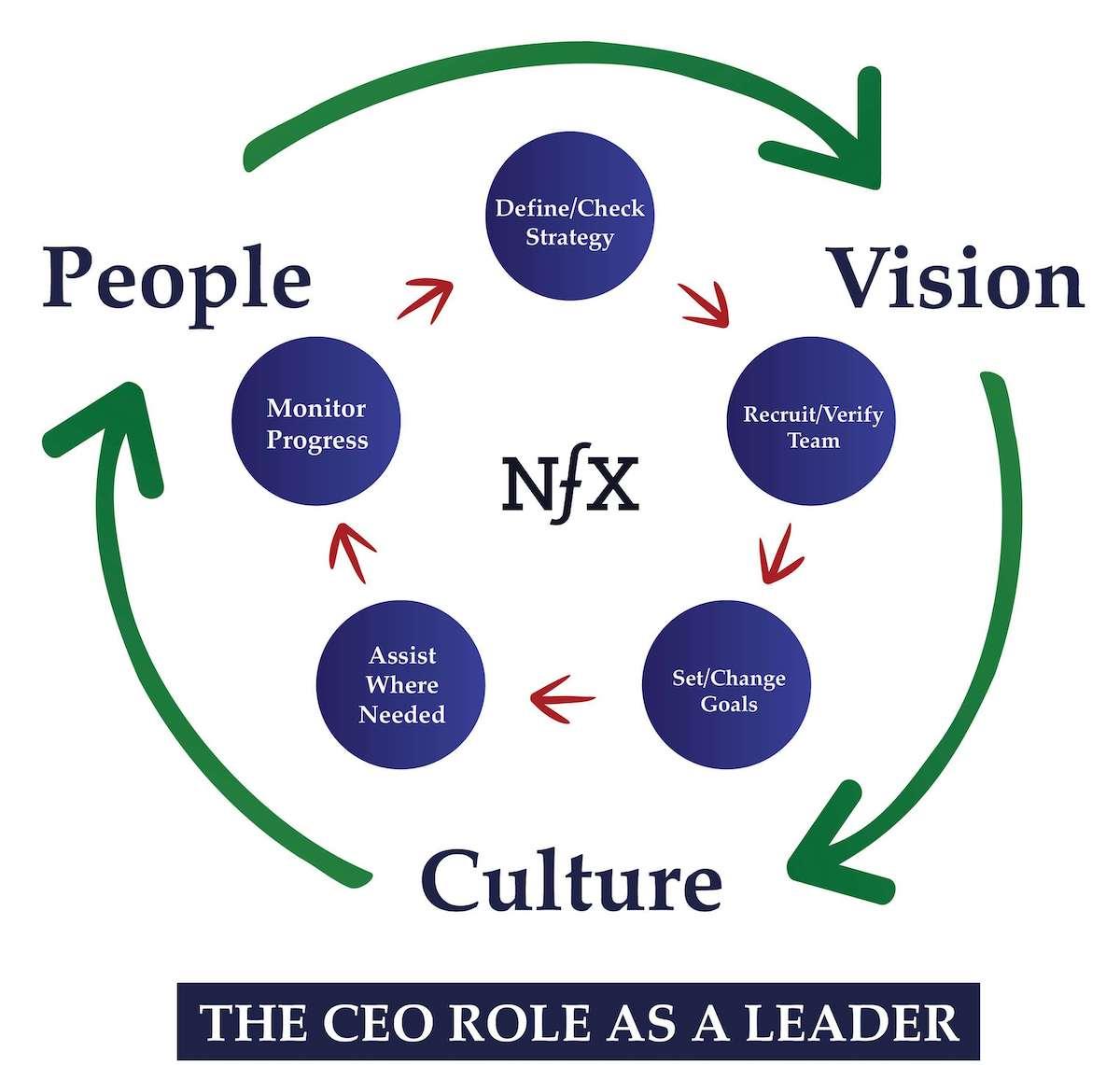 The reality is that if you only focus on the management part of being a CEO, you’re very unlikely to build an amazing company. It’s the leadership part that is going to get your company to be the winner because there are many good managers, but very few great leaders. And it should be said that leading a startup is 10X tougher than leading a standard company given uncertainty and the need to change your direction often.

Leadership is harder to master than management. It takes soft skills and big-picture thinking. But it’s also harder because the best leaders lead by example. It all starts with you. You’re the CEO, you’re the inspiration. You’re the one people look at. You have to become the type of person that you’d want leading yourself — the type of person who you would willingly follow.

And while you can recruit managers who are better than you are at their job, it’s very unlikely that your team will ever strive to be better than you on the core leadership area of people, vision, and culture. Why would they even try? And so your example becomes not the basis but the actual ceiling of what you can expect from your team. That’s why leading by example is so critical.

Hiring is one of your most important jobs in leading a startup, especially early on when the DNA of your company culture is at stake. Choosing who to add to your team at this stage has long-term compounding effects for your company. The mantra of the startup world is speed, but hiring is the one area where it pays to take it slower because the cost of mistakes in hiring is much greater than running a failed experiment.

But once people join your team, you have to lead them – which means more than just giving orders.

Though it’s counter-intuitive to many Founders, one of the biggest differences you can observe about top leaders is that they care deeply— about the company, about the product, and most of all about the people on their team. Top leaders understand that if they care and their team feels it, they’re going to love their work and company. Moreover, it opens the possibility for them to care as well, which will make them better leaders in their own right. So by caring, Founders will quickly see those compounding effects.
‍
The thing is that caring is incredibly hard to fake. Demonstrating you care comes in the little things, and if you authentically care, your team will know it subconsciously. Here are two simple, high-leverage things you can do right away to lead people better:

Vision – Leaders have a clear and powerful vision

My colleague Pete has previously written about the need to have a clear and compelling vision for investors when you’re fundraising, but it’s just as important — if not a lot more important — to have it internally for your team.

All of this is contrary to human nature, and it’s something you have to overcome as a leader in motivating your team. A clear vision — a great “why” — gives you the best chance to do that.

But that vision has to be something your team connects to in their individual roles. It’s not just important for the vision to be compelling, but if you’re a junior person at a company working all those hours for little pay, you also have to know how what you do ties in to that big vision, how each role plays a part in reaching the company’s goals.

And that’s something you have to articulate as a leader, often and clearly. Typically you have to repeat it many more times that you intuitively think you need to. Not only do you want to tell and retell the story and vision of your company, but you want to paint a picture to your team how they fit into that bigger vision as individuals.

Your goal as a leader is to get them ‘addicted’ to your compelling “why”. All the time you spend on that is going to pay big dividends in your team’s commitment, in their understanding, and in their feeling that they’re part of something bigger than their job. I often call employees and ask them about their company’s strategy only to find out to the surprise of the CEO that they have little idea what it is and how they are helping the company get there. Never allow yourself to get to that position!

It’s a lot more fundamental than that. We’ve written about this before in the NFX Company Culture Manual, which gets more into the tactics. From a leadership perspective, it’s important to understand that everything you do as a leader helps set the tone for your culture. It really does flow from the top down, for better or for worse.

As a leader, there are several things you can focus on to promote a culture of speed and excellence:

There’s a lot more to talk about here, and the playbook for how to engrain each of these things in your culture as a leader is something we’ll be sharing in the future as an update to the NFX Company Culture Manual. But as a leader, know that diligent attention to your culture is key.

Every morning in my most recent stint as CEO, I asked myself:

Am I taking my team where they ought to go?

Am I caught up in the rabbit hole of management, or am I actively leading?

Am I leading by example?

And the days I said yes, those were the good days. Being a leader is tough. Being a startup leader is even tougher. That’s why not everyone’s a great Founder or a great leader. It requires a lot of work and attention. You have to keep learning every day to have a chance. But when you nail it, the upside is massive.

Stay up to speed
Weekly resources, news, and stories. Be the first to know and get insider tips.
208,827 startups read our weekly essays.
Connect with
Gigi Levy-Weiss