The Founders’ List: The Bitcoin White Paper by Satoshi Nakamoto 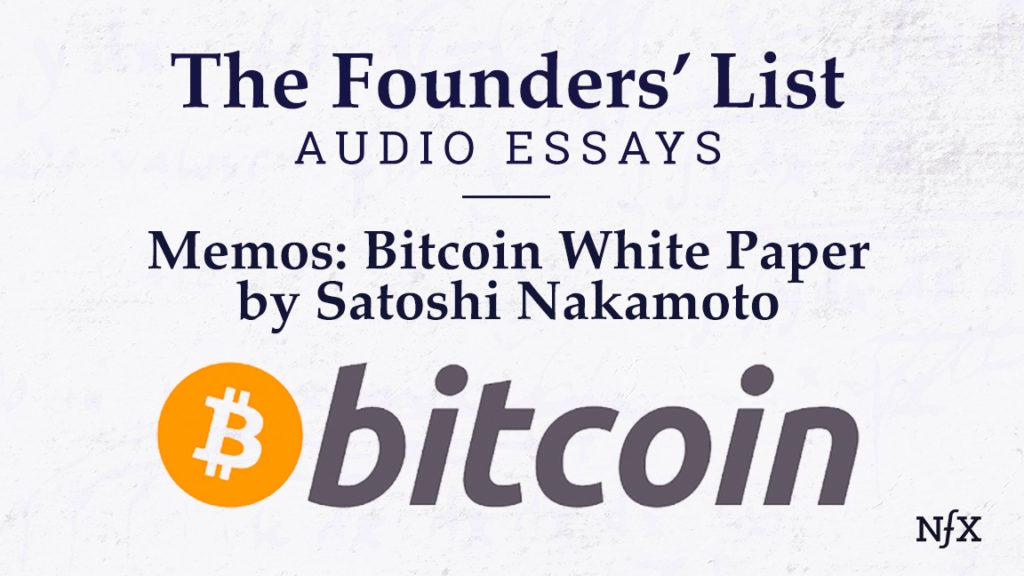 Originally written under the pseudonym Satoshi Nakamoto, Bitcoin’s original white paper titled ‘Bitcoin: A Peer-to-Peer Electronic Cash System’ was released over 12 years ago. Considered the most seminal piece of work in the cryptocurrency movement, the Bitcoin White Paper outlines blockchain technology and the entire decentralized revolution.

The content of this 9-page document incited what can only be described as a revolution in the world of fintech. More relevantly, Bitcoin’s white paper laid out an inspiring new definition of money at a time when faith in the traditional financial system was still being salvaged.

Satoshi launched the first Bitcoin client in early 2009 and then handed the project off to the community in 2010, where it has since thrived as the open-source of study, work, and fascination for millions across the globe. Today we bring this infamous memo to The Founders’ List so you have a chance to listen to his original outline of such a world-changing idea. Examining the white paper origins is a great exercise in understanding why Bitcoin has the influence it has in today’s world. Satoshi Nakamoto’s blueprint is the official “birth certificate” of Bitcoin.

Stay up to speed
Weekly resources, news, and stories. Be the first to know and get insider tips.
209,091 startups read our weekly essays.
Connect with
The NFX Team