From Idea To $200M Acquisition In Just 2 Years: 4 Lessons from Bridgecrew 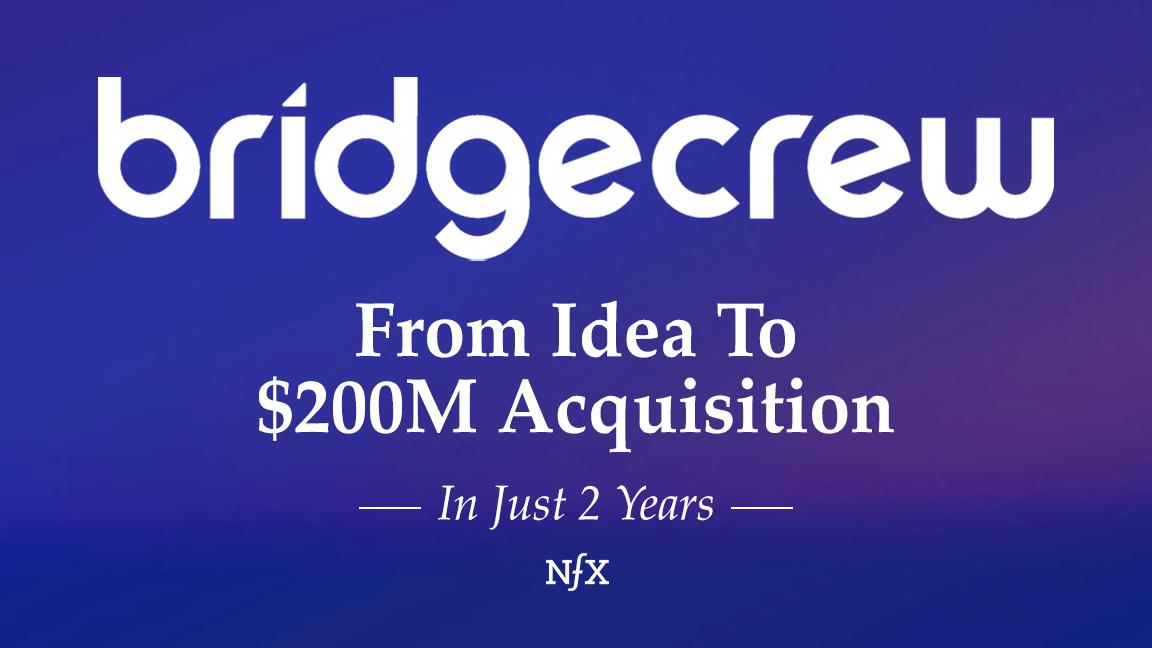 Success for most venture-backed startups ultimately comes in two forms: acquisition or IPO. And yet it’s rare to get a candid view into what confluence of technological shifts, network decisions, and Founder DNA got them there — and what other startups can learn from their wins.

Moreover, as most exits take years – more than 7 years on average – the actual factors that determine the success of the company at its early stage are often lost or forgotten. This is why a meaningful early acquisition provides a unique perspective on what really makes early-stage startups successful.

Today, Bridgecrew.io is being acquired by Palo Alto Networks for $200M. This comes only 2 years after the company was started by top founders and cybersecurity experts Idan Tendler, Barak Schoster Goihman, and Guy Eisenkot.

As a partner to the team’s thinking process even before raising capital, and then as an early Investor (NFX led the $4M seed round as well as participated in their $14M Series A round), I have had a backstage pass to observe the Bridgecrew team’s unusually powerful traits that make them what can only be called Super-Founders.

These are the traits that allowed them to find their path, build a meaningful product, create significant traction, amass community support and eventually sell the company – all in just 2 years.

I want to share 4 key learnings from Bridgecrew’s success and their acquisition for the benefit of Founders everywhere.

From Idea To $200M Acquisition In Just 2 Years

Obsess over product-market fit & their customers.

April 2020: Bridgecrew launches out of stealth mode and announces a $14 Million Series A round led by Battery Ventures with NFX participating. A number of strategic investors and cloud-security luminaries also join the Series A, including:

April 2020: The company rolls out its free community offering; customers can sign up in a matter of minutes. This reflects Bridgecrew’s developer-first, community dedication.

December 2020: Both its customer base and monthly sign-ups triple during the second half of 2020.

February 2021: Bridgecrew is acquired by Palo Alto Networks for $200 Million.

1. The Power of Super Speed

For startups, speed is your number one advantage and a major indicator of your eventual success. The biggest question you can ask yourself is how your next iteration can be better than the previous one — and how quickly you can get there.

The Bridgecrew team spent their earliest days vetting their approach with future customers and industry heavyweights, to ensure they were creating the right solutions for the industry’s hardest problems. By working directly with early customers, they identified the opportunity to codify cloud security and embed it into the development lifecycle through automation and infrastructure as code (IaC).

The pace at which Bridgecrew added new features, integrations, and partners during their short journey has been incredibly fast. They never stopped looking for fast-moving water.

If you look rapidly and smartly enough, with open communication with your customers, you will typically be able to find some subsection of people who are very hungry for your product. Once they found it, Bridgecrew’s customer base more than tripled last year in 2020 and their open-source community grew to millions.

For Bridgecrew, by treating their customers as a community, learning from them, and iterating with super fast speed, their customers became active partners — an essential element of Bridgecrew’s value creation.

2. Attack the white space created by tectonic shifts in technology

What we see in many great Founders is a clear view of the trajectory of emerging technologies and knowing when technology and industry/ cultural trends are about to converge.

The Bridgecrew Founders observed that more and more organizations were moving IT services and software to the cloud, which was increasing the ‘attack surface’ for bad actors and allowed for more security issues to develop. On top of that, they noticed a tectonic shift in which cloud security was becoming a full responsibility of engineering teams instead of centralized security teams. However, current tools were not developer-friendly and created more burden for the engineers.

Bridgecrew’s solution addressed this so that anyone, anywhere inside an organization can monitor and automatically remediate cloud infrastructure insecure configurations. Remediations and fixes become a native part of engineers’ workflow.

They found opportunity in the white space created by accelerating adoption of cloud technologies, and the cultural acceptance of security as an engineering problem. When you look at underlying technology or market trends, you can innovate new solutions.

It’s rare to see startups succeed with both a top-down and a bottom-up sales approach working in concert. Bridgecrew sold directly to the CISO/CIO while also championing an open-source solution used by millions. In the past year alone Bridgecrew developed four open-source projects, including its novel IaC scanner, Checkov, which was used by individual contributors and Fortune 100 companies alike.

4. Build Your In-Network Of Supporters

When trying to change the way an industry operates, you need a community of visionaries — as well as passionate customers — on your side.

To help shape the paradigm shift taking place in the market, Bridgecrew expertly prioritized its network and sought partners who deeply understood the need to change the way infrastructure security was consumed.

They sought cloud security luminaries at every step of the way, proactively bringing them on as investors, advisors, and board members. They also dedicated themselves to being a developer-first company, seeking to save time and reduce workload for engineers.

As a result, Bridgecrew’s “in-network” community now includes Bridgecrew customers, partners, strategic investors, and key members of the open-source community. This provides a diverse and multi-faceted sounding board for the company and a powerful support network for continued growth from the inside out.
Additionally, while great Founders don’t build companies to get acquired, the relationships they build early on often give them the optionality to raise more capital or be acquired a few years down the road.

As we’ve written about, Bridgecrew is the perfect proof that the value of your network compounds over time.

Stay up to speed
Weekly resources, news, and stories. Be the first to know and get insider tips.
208,816 startups read our weekly essays.
Connect with
Gigi Levy-Weiss