Today we’re announcing the expansion of NFX. We’ve raised a $150 million fund, supported by some of the world’s most influential entrepreneurs, endowments, foundations, and funds of funds. We’re out to transform how true innovators are funded.

Let’s face it — Silicon Valley is losing its magic.

Our community has shifted from a creativity and counter-culture to a money-only culture.

The problem with a money-only culture is that it attracts people, discourse, and values that are antithetical to innovation. Those who change the world are independent forces who see what others do not. Like magicians, they transform our reality.

The greatest magician of all, Harry Houdini, was someone we’ve admired. He made a detailed, lifelong study of his craft and therefore saw things others did not. A hungry immigrant from humble roots, he redefined his entire industry. He could have stopped there, but as a true innovator, he felt a moral imperative to use his insights to elevate other magicians and set benchmarks. In that same spirit, our goal is nothing short of transforming how innovators are funded. Three things are clear to us as we begin this next phase of venture capital.

We believe software will finally transform the venture capital industry itself.

Ironically enough, our startup funding ecosystem remains largely analog, relying on labor-intensive processes instead of modern technology. For both founders and investors, too much time is wasted during the entire journey.

At a time when software is eating the world, the impact of the venture capital community is capped by its outdated workflows and lack of software. It’s like we’re a company that grew too fast without proper infrastructure, and now we’re stuck at half speed.

As founders who’ve started 10 companies with exits over $10 billion, we know firsthand the power of networks and software in value creation. While we believe venture capital will remain a “people business”, we’re also certain that software will radically change how innovation is funded and supported in the next 10 years. At NFX, we’re using code to address headaches like fundraising, hiring, and knowledge transfer. And by opening many of our tools to the entire tech community, our goal is to accelerate the rate of innovation to meet market need.

We believe the most important drivers of breakthrough innovation — network effects and growth — remain largely hidden playbooks from all but the top companies.

Network Effects. As much as the Internet has changed the foundation of our economy, networks have changed the trajectory of entrepreneurship. Starting with Microsoft in 1976, network effects are largely responsible for the exponential growth, returns, and dominance we see today in many of the world’s most transformative enterprises — including Facebook, Salesforce, Google, Slack, and iOS.

Yet in a study we’ve done, we quantified an imbalance. Since 1994, 70% of all value created in tech came from companies with network effects at their core. Network effects were most often the strength that enables Davids to beat Goliaths.

Surprisingly, just as the Big Five are now consolidating their dominant threat to startups, and just as startups have lost the favorable winds of the Internet and mobile tech shifts, only 20% of the startups we see have a true network effect built in to their core.

Many otherwise great founders don’t even understand network effects to the level required. They are missing a key ingredient they will need to fight successfully in an increasingly competitive environment.

As we head into a future that is deeply networked, every part of our lives and economies will be inevitably transformed by networks — transportation, communication, commerce, health, wealth, entertainment, manufacturing, robotics, biology, and beyond. Founders who master network effects early-on will be more likely to build market-transforming companies.

We believe in network effects so deeply that we’re building a network effects-powered venture fund. Every founder we invest in knows they join a network, connected with software, supercharged by the tribe, and banded with a well-orchestrated network of venture operators around Silicon Valley and Israel. Ours is a culture of shared KPIs and insights. Every new NFX company makes the others stronger. In the NFX model, access and control reside at the edges of the network. This allows strength and complexity to grow exponentially, like all well-functioning distributed networks. Whereas the old venture model was concentrated in the minds of the few GPs, this model turns that inside out.

Growth. Despite its importance, growth techniques are still not well understood by most Founders, even second time ones.

Growth is a philosophy, a practice. There are no silver bullets. For a startup to develop the long-term mindset that builds healthy, sustainable, and truly disruptive companies, the growth philosophy needs to be understood by the whole organization. Data driven thinking must be adopted by nearly everyone. Founders and their teams must maintain courage to continually experiment — and not just looking for 5% improvements, but looking for 1000% improvements and 10,000% improvements. They must question their fundamentals about things as basic as the customer, the distribution channel, the language used to describe the benefit to the customer, and even the name of the company itself.

As founders, we have engineered sustainable growth cultures and industry-leading growth trajectories. As investors, we continually coach numerous Founders to the same levels of success. We bring that instinct, as well as the latest techniques, to each of the companies we invest in. 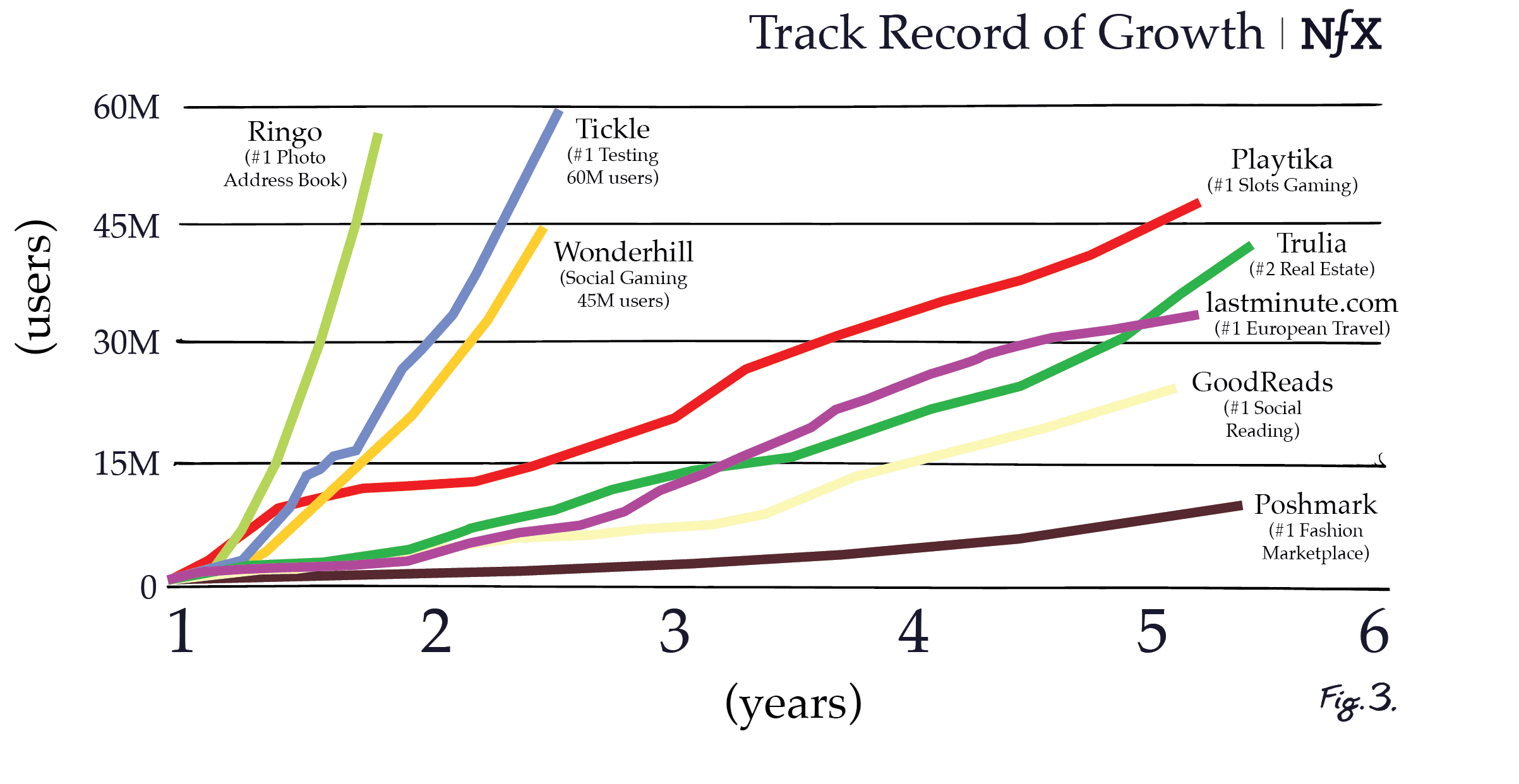 We have seen professionally that culture is often the defining characteristic that builds the greatest companies. We believe that is true for your company, for our firm, and for our entire Silicon Valley ecosystem. Culture is how we talk about things, how we treat each other, our assumptions, and our priorities. There are good and bad ways of doing it, and the next phase of innovation will need to get it right.

We think Silicon Valley has lost its way culturally.

Dig into the early days of most successful companies, and the story you’ll tend to hear is that of humble, hard-working entrepreneurs — many of them immigrants — who came to Silicon Valley because it was home to creatives, counter-culture, and people who valued a “think different” mentality.

We’ve forgotten about magic, product and deep tech in favor of buzz, status, and the echo chamber.

We’ve forgotten that there is a fundamental way to treat people, with decency and humanity.

We’ve forgotten about the long game and focused only on short-term wins.

For NFX, our culture — our people, the people we surround ourselves with, and the norms we use inside and around us — is the most important factor in our success. Our team has built and scaled ten successful VC-backed startups, in ten industries, on three continents, over three business cycles. We would have never built these without our mentors and advisors, who were founders themselves.

When we started companies, we didn’t do it because we wanted to — we did it because we had to. It’s that hard-wired instinct to challenge the way things are that we share with the founders we back. We believe that compulsion to see what others do not is often misunderstood by others, yet it is nearly always the first chapter in how the future is rewritten.

We invest in a select group of early stage tech companies across all sectors, as long as we can see the potential in them to develop network effects and thus defensibility. This includes AI, blockchain, biotech, fintech, AR/VR, IoT, enterprise, SaaS, marketplaces, robotics, and more.

We concentrate on companies in Silicon Valley and Israel because we believe those geographies have the most developed ecosystems to support breakout companies.

Every company we invest in has equal access to our network and platform, which we call The Guild. The Guild is an active community of 200+ Founders we have invested in who are committed to sharing KPI’s, insights, and access with the other top Founders building network effect businesses, protected by water tight privacy policies.

We started investing at the pre-seed stage in 2015 with a three-month accelerator program in the Bay Area. That investment approach was structured: $120K, a three week growth curriculum, and a three month program, starting on a specific day and ending with a demo day. We ran five of these classes. The quality of companies that came out was as strong as any such group in the world, and the NPS scores from the founders were consistently 90–100. It’s a special group to be a part of and we’re proud of the guild culture we’ve built with them.

Now that we have an institutional fund, we’re able to expand how we invest. We have two modes:

1) For early startups, we’re taking the structured program and doubling the good parts and streamlining the sticky parts. Now we invest $250k on a rolling basis and give 6 months of structured, hands-on support. That means NFX founders don’t need to wait for an “application period” or “start date” to get going. They can activate our network effects and growth curriculum on their terms.

2) For seed and early A startups, we invest from $500k to $5 million, give them access to the Guild platform, and work with them through exit.

And while this is the general structure, we also believe in breaking our own rules. Startups need different things at different times, so we customize the NFX experience based on a founders’ need. This is the kind of venture firm we’d have wanted when we were starting companies.

Just like the exclusive startups we invest in, we will keep experimenting and quickly iterating. The status quo is never an option.

As a community, our role on the world stage is too great, and our potential impact remains too high to do otherwise.

James Currier is one of Silicon Valley’s foremost experts in growth and network effects. He’s a four-time serial entrepreneur, and a pioneer of user-generated models, a/b testing, crowdsourcing, viral marketing, and myriad other growth techniques.

Pete Flint is the co-founder and served as CEO of Trulia, one of today’s most prolific marketplaces, from inception until its merger with Zillow in 2015 at a $3.5 billion valuation. He was also on the founding team of lastminute.com which was acquired by Travelocity/Sabre Holdings for over $1 Billion.

Gigi Levy-Weiss is one of Israel’s top investors, a two-time CEO, and serial founder. He is the co-founder of Playtika, which was acquired by China Consortium / Cesars for $4.4 Billion.

Stay up to speed
Weekly resources, news, and stories. Be the first to know and get insider tips.
208,931 startups read our weekly essays.
Connect with
The NFX Team