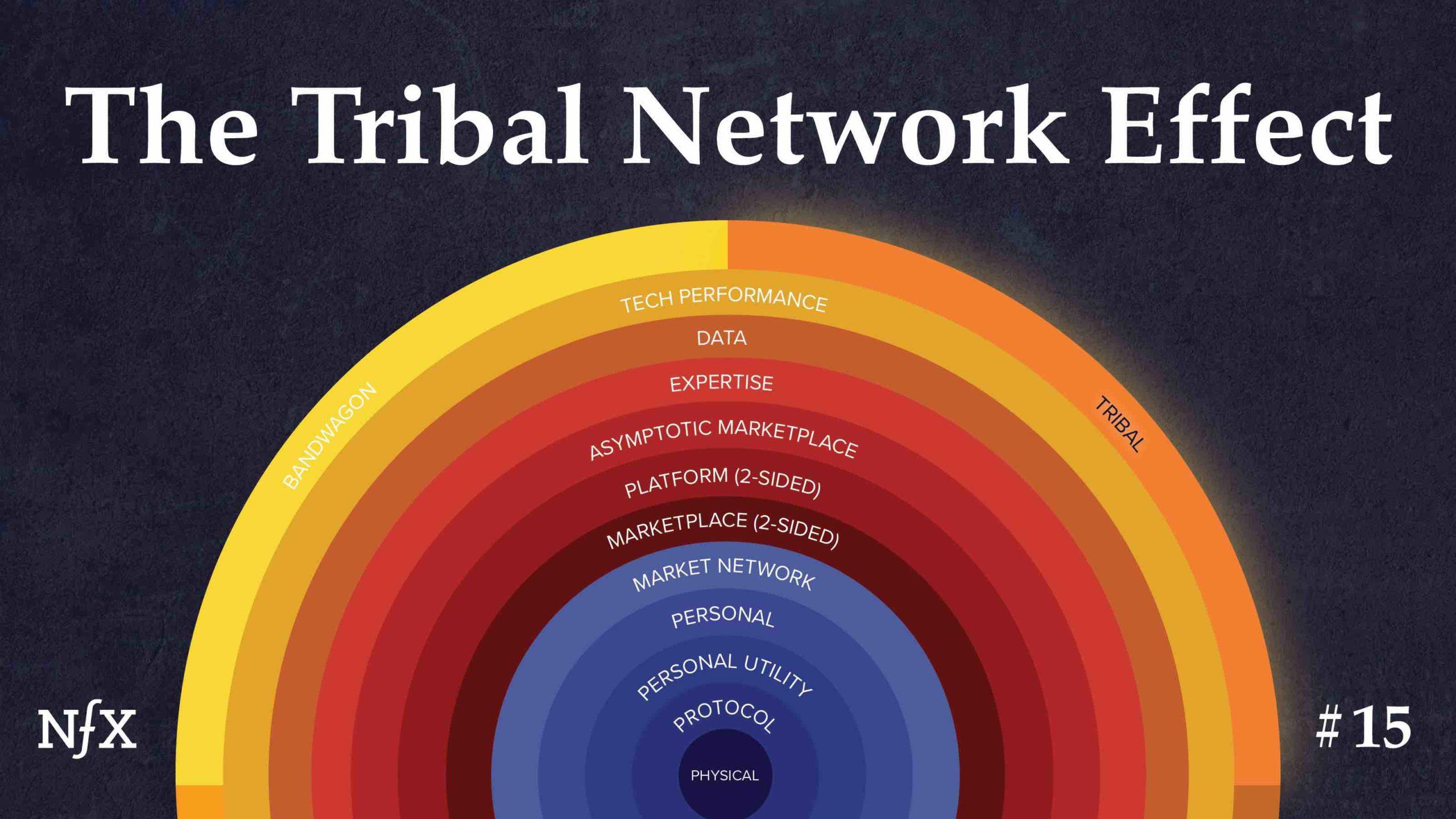 We suspect this was the very first network effect historically, as Homo sapiens evolved as a pack animal, trying to survive. The ones that built the best tribes survived to procreate, so we are all descendants of the best tribe builders. Those who weren’t good at building or joining tribes died off. Thus, our brains are wired to join tribes. 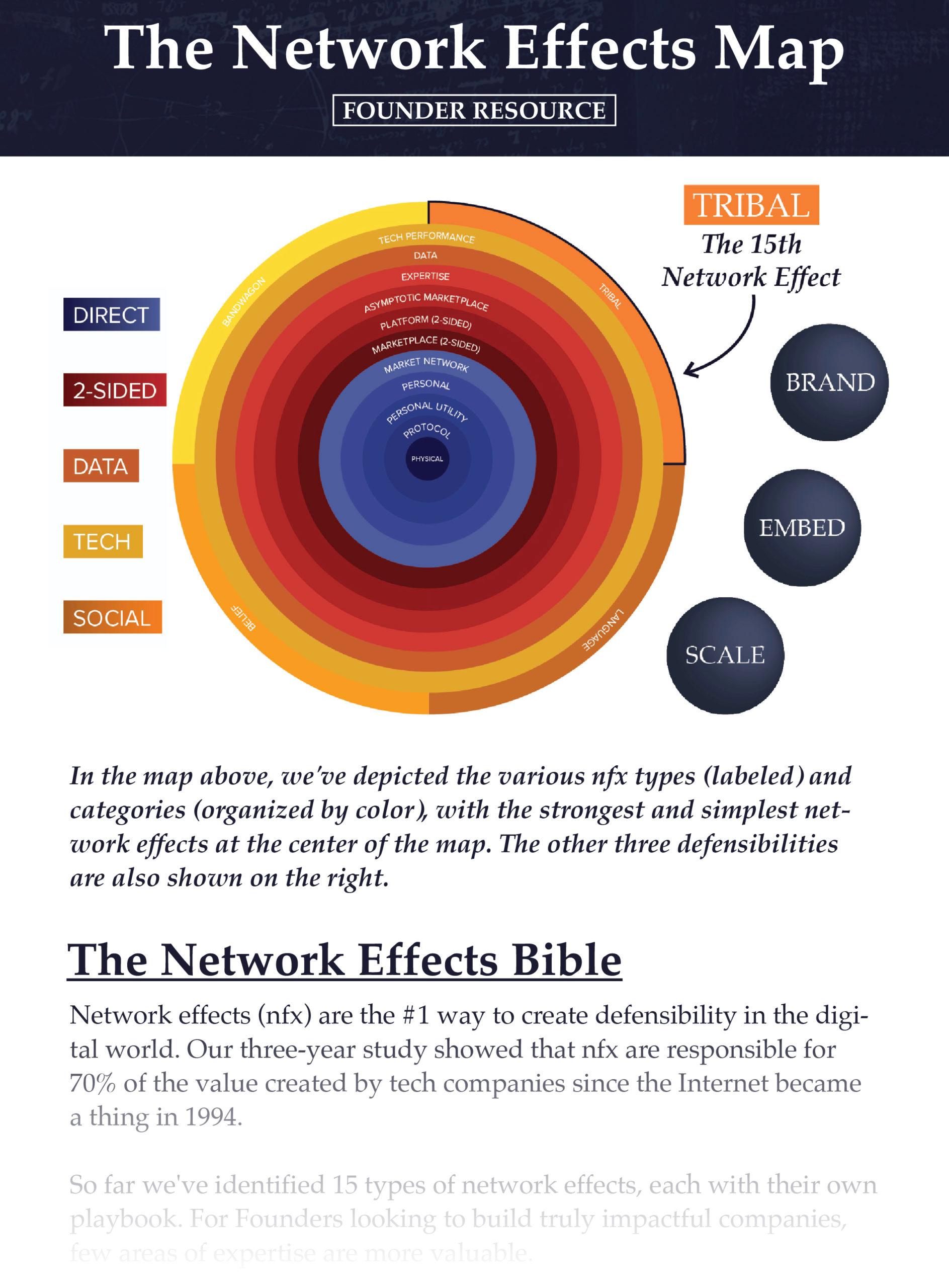 A few key things contribute to the formation of strong Tribal network effects:

Not all tribes share all six of these characteristics, but the more they do, the more powerful the tribal self-identification becomes in the minds of the tribe members, and thus the stronger the Tribal network effect.

As with other network effects, network size and network density also matter in the formation and strength of Tribal network effects. The larger the tribe, up to a point, the more valuable it becomes because you are more likely to encounter and form relationships with other nodes. College alumni networks, for example, often have clusters in many different cities and companies where alumni seek each other out. Tribal networks also have a higher density of relationships between nodes because self-identification between tribe members causes them to look for shared affinities, and motivates them to altruistic behavior towards other nodes in the network.

That, in turn, leads to a higher proportion of shared connection between tribe members than in other types of networks, which incentivizes further relationship-formation and sets off a virtuous cycle. In a tribal network, people (often unconsciously) recognize that potential connections are more likely to materialize into actual connections, causing a self-fulfilling propensity to try harder to build in-tribe network connections. This creates a denser lattice of links between the nodes, driving network effects, and network value.

Different Forms and Strengths of Tribes

We each belong to many different tribes. In other words, we are each a node in many tribal networks. The way humans form their self-concept is through many different “identity pegs.” We are complex and multi-layered.

The strength of each of these tribes depends first on how effectively they build network effects based on the six attributes listed above that contribute to tribal network formation.

The strength of each tribe also changes based on the context. For instance, if I’m on a trip to Washington DC and I meet someone else from Silicon Valley, the “tech tribe” part of us might activate and give us more incentive to build a connection. The same thing applies if I meet someone who also went to Princeton, or if I see another Celtics fan on the street in Florida. These different tribal identity layers activate when they distinguish me from the broader network environment. 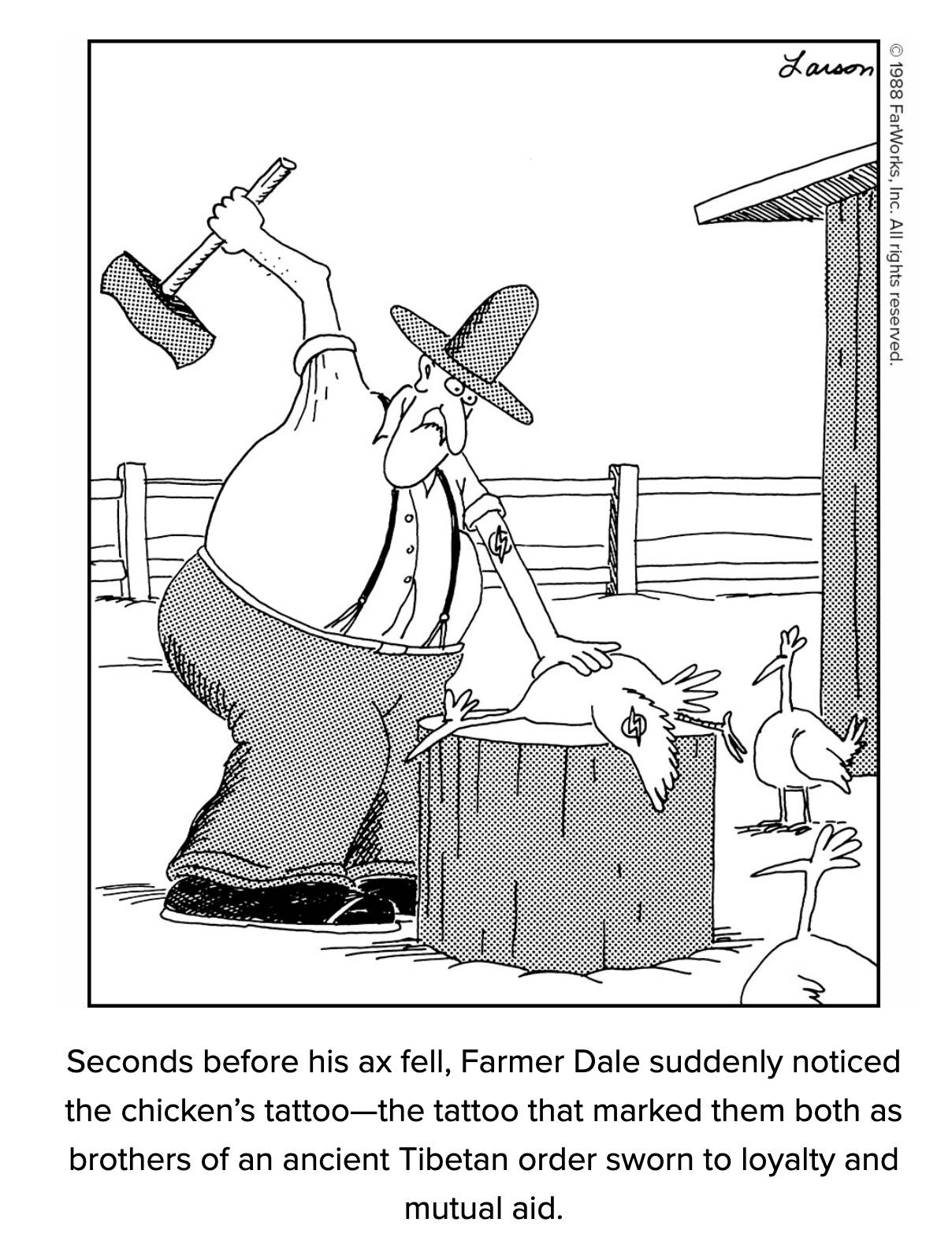 NFX does not own the rights to this cartoon. They are owned by the genius Gary Larson, the writer of The Far Side. Please visit his site https://www.thefarside.com

The comic above exposes a serious point: we self-identify with and give value to those who share membership with us in a tribal network. We’re incentivized to treat other tribe members as if we know them, even if we don’t. In this case, the size of its tribal network saved the chicken’s life. Now that’s value! And network effects are about making more value for all members with every additional new member.

Because our tribal identities are most triggered when they distinguish us from those around us, rivalries and competition play a key role in raising our level of self-identification with tribes.

For example, think about some of the most famous sports rivalries: Duke vs. North Carolina, Ohio State vs. Michigan, Red Sox vs. Yankees, Liverpool vs. Manchester United, etc.

Competition and rivalries improve group cohesion and power the network effect. It creates an in-group and an out-group, and the human mind is structured to highly value their in-group, particularly when the contrast with the out-group is most visible. We naturally respond to “a battle” of some kind, a force my tribe is “against.”

You are more likely to feel protective and invested in your Duke tribal identity the day of a Duke vs. UNC game because the presence of a shared adversary increases the overall level of shared investment in the outcome. Nothing drives attention quite like the drama of “us against them.”

When your tribe wins, it feels like you win.

There are four main ways to put your new understanding of Tribal network effects to good use.

Our tribal networks add value to our lives by giving us an emotional sense of belonging and identity, and by helping us form useful connections.

For Founders, tribal identities are powerful and enduring, and they generate transformative value throughout your lifetime.

It’s one of the many reasons why at NFX we don’t call our “portfolio” of investments a “portfolio.” We call it the NFX Guild. We’re in the business of giving all our companies every advantage we can. We believe that one of the best ways to do that is to nurture a tribal network effect in the NFX Guild, for the enduring, lifelong benefit of our Founders.

The history of innovation shows that tight, dense, and engaged communities of innovators — tribes — are often at the forefront of technology’s biggest leaps forward. If that’s something you want to be a part of, come talk to us.