How VCs Think: The Psychology That Drives Investing Decisions 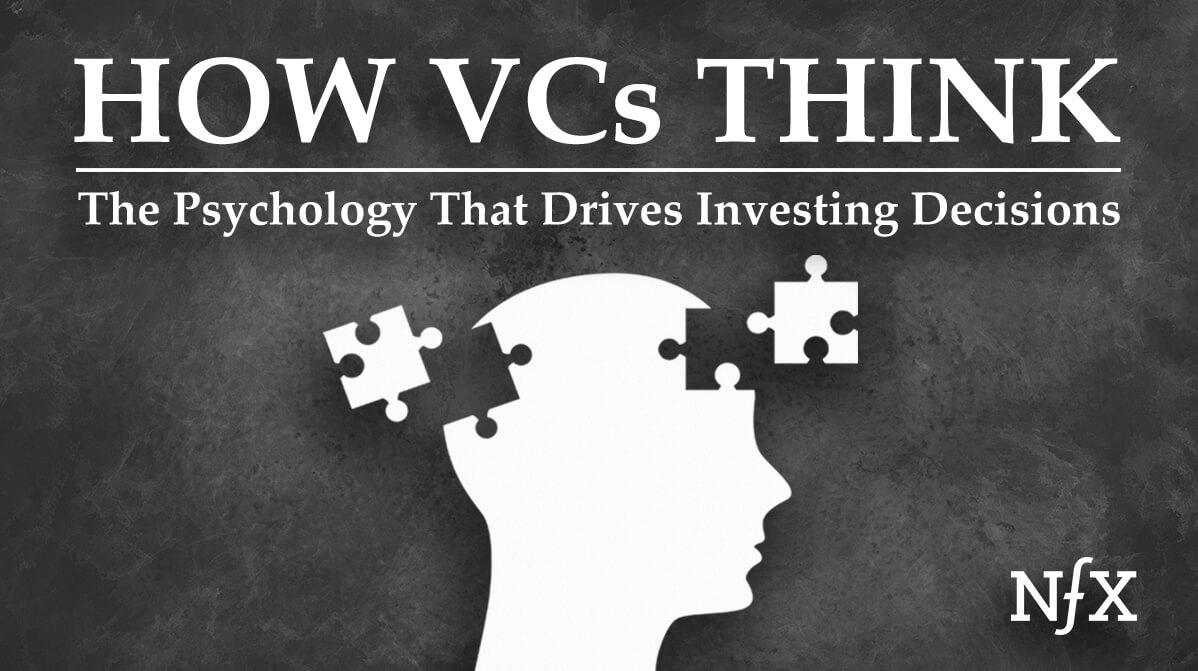 Like so many Founders we work with today, when we were founding and advising companies we always felt a disconnect between the way we saw reality and the realities of VCs we met along the way. It sometimes felt as if we were not even speaking the same language.

Looking back, it made sense. We were deep in the trenches of the Founder ecosystem, didn’t really know the VC mindset, and didn’t always understand them. We weren’t speaking the same language. But, over the years, we learned the hard truth: for a startup, understanding VCs’ mindsets is often as important as understanding the mindsets of your customers. With no capital most Founders will not win, so you’d better learn the language.

A few years passed and we are now VCs. We now see the interaction from the other side of the table, and it is clear that the disconnect is still around, no different than it was when we started our own journey.To help bridge the gap, today we’re sharing a few psychological drivers that predictably dictate many VCs’ mindsets and decision-making processes. These are patterns we often failed to see back when we were building companies, and our hope is that Founders can learn them to master the skill of Founder/VC communications.

To begin, perhaps the most efficient pathway to understanding anyone’s mindset is understanding their pain points. Now, while everyone assumes the VC life is all rosy, in reality it’s not always a simple role. I will elaborate.

The first thing to understand is the economics around a VC. The partners in a VC hold an entity called the GP (General Partner). The money for investments comes from Limited Partners who are mostly institutional investors, which GPs invest on their behalf. The GP only makes money once the LPs return their initial investments; once this happens, the GPs get a percent of the profits called Carried Interest, usually around 20% of the profit.

But when we look at the holding percentages, early-stage VCs would get to the exit event usually with 10% or less given dilution along the way. So to return $300M, a fund would have to have invested in companies with an aggregate exit value north of $3BN. Not tough if you happen to be the investor in a Facebook or an Airbnb; but as most exits are much smaller than $1BN, the chances of any fund getting to $3BN of exit value are not high.

What’s the outcome of these numbers? Essentially two little-known VCs guidelines which are critical to understand.

It is true that some VCs try to focus on “smaller” startups with lower expected outcomes. But in general it’s incredibly tough to return the fund multiple times with that type of strategy. Most VCs you meet will be very serious when they tell you, “I can see your startup turning into a business worth $100M but not more, so it’s not for us”.

This is tough to understand. If a VC can invest now at, for example, an $8M valuation exiting at $100M would seem to be a good investment, especially if you look personally at your stake in the company. Selling it for $100M seems to you like an amazing outcome.

But what we didn’t understand when we were entrepreneurs ourselves was this reality: the $100M VC invests $2m for 20%, then has to add more capital in subsequent rounds in order to get $20M at the $100M exit (assuming no further dilution). This doesn’t move the needle for the $100M VC–they need to get to $300M of returns. This is why VCs really MUST aim for huge outcomes.

The venture business is a hit-driven business. Every successful fund will have 1 or 2 big hit companies that “make” the fund. While everyone is smart in retrospect, clearly the VC didn’t know which company would be the most successful at the time of investment (otherwise they would have only invested in the hits).

The outcome is that VCs need to get to sufficient holding – usually 10-15% for a seed fund in any company. Imagine the pain resulting from the fund holding only 3% in the company that could have returned the entire fund. And at lower percentages of holdings you need even higher overall exit value. Big stakes are critical for VCs.

Now that we understand the numbers and the pressure to get sufficient holdings in companies that can be huge, let’s try to understand how tough it is to actually find these companies.

The VC partner role is all about 1) screening potential investments, 2) diving deeper into the better deals and 3) eventually choosing the right companies to invest in. Not a horrible job you probably think, but it’s also not an easy one. VCs can get 10s of meeting/investment requests per day, and it’s never clear where the next great company will come from so they need to review all of them. Even though there are many decent ideas and impressive teams, VCs only get to invest in, say, 1 in every 100 companies they see. (And that’s without even touching the really hard part of the job – which is having to say NO more than 99% of the time. Not fun).

The 2 Psychological Drivers of VCs

So what are the key psychological drivers VC partners develop to cope with those pain points? They’re actually pretty basic:

1. FOMO: Fear of missing out

Every VC likes sharing their big wins, but what we underestimated when we were Founders was that every VC also has stories of their big losses. The “deals that got away” come with deep personal regret, and while some of this is based on the lost financial benefits (of course), more often these regrets go a lot go deeper. Big hits are so far apart that seeing one, having the option to invest in it, and missing out is the VCs biggest fear.

I personally missed out, for example, on a great company called Yotpo. I loved the team but not the product and I was wrong. I said no and, other than losing a potentially amazing financial outcome, I also missed out on being part of a phenomenal journey. And this was not my only big loss…

So when a VC partner sees a company which could be huge – with a great team, in a field they like and a good idea – it’s tough not to invest. That’s the first psychological driver.

It’s common knowledge that VCs are “programmed” to increase profits, but few people talk about the way VCs are programmed to avoid looking stupid and hearing, “I told you so”. What could make you look stupid? Betting on a company that competes with a very successful company (e.g. who wants to invest in a new social network today?); investing in a field where a top fund has already invested in a competitor (even if the field is still not dominated by anyone yet, once a top fund “marks” the “winner”, other companies consistently find it tougher to raise); or investing in a field where a competitor raised a very high amount of money (we’ve seen funding dry out for other competitors after Softbank invests a mega round in a field).

The outcome: VCs don’t want to invest anywhere where they can end up looking stupid. “How did you invest in an Uber competitor after Uber already raised $5BN?” is not a question you want your LPs to ask you.

These two psychological drivers represent the entire story: the stories VCs tell themselves. With their need to screen hundreds of companies and choose the winners that can turn into huge companies, VCs are constantly balancing their FOMO and their FOLS. Or in other words: VCs want to find a very safe deal at the (low) price of a very risky deal. Once you understand this – you can start using this mindset in your favor.

One other nuance to understand about interfacing with VCs is that time is the VC’s friend – not yours. The VC will always prefer to wait to make their investment decisions; the longer they wait, the more data they will gather about your business and the more they will get to know you. And this data means lower risk.

It’s in the VCs best interest to keep the optionality – they can always say “no” later. You, on the other hand, need the funding NOW to grow your company and move fast, of course, but you should also know that every day that passes gives the investor an opportunity to hear a negative or mixed review of your company or your field. And that could give them cold feet. You want to close fast, and the only way to get investors to move at your pace is by going back to FOMO because a VC usually only moves fast only when other VCs are also interested.

Using the VC Mindset In Your Favor

To use this understanding to flip the odds in your favor you simply need to convince the VC of the following 3 narratives. The better you portray these narratives, the more term-sheets you will get. It’s as simple as that.

1. Convince the VC you are low risk

Start by learning how VCs see your numbers. We’ve shared playbooks for this before, see our How VCs See Your KPIs and Ladder of Proof essays. From there you can work backwards to find the right data points that will communicate your narrative in the best possible way.

Pre product it can start with:

2. Prove that you have a huge potential

Numbers play a big part in proving yourself. Master your TAM and SAM and come prepared with the data. Nobody believes you can take 50% of your market, so ensure that even if you’re talking about 5% that you have a huge story to tell.

Using references from other industries can be helpful to illustrate your point: “the SaaS platform for this vertical created a multi billion $ business, the vertical we are after is similar size, so we can build a similar sized business”.

Present your potential not just top down, but also bottom up: “we aim to capture 5% of the industry’s IT spend. Bottom down this means that we will need 10% of the potential customers to pay us $1k/month, which makes sense”. When you lock down the numbers both bottom up and top down, your story becomes a lot more credible.

This deserves a post of its own but, in general, Founders should always aim to convey a sense of momentum. Mention you are speaking to others (without disclosing names – you don’t want them to talk to each other!). When you get a term sheet let others know to get them to move faster; the hotter your deal seems – the more likely you are to be interesting to more investors. Sentences like, “No pressure but we are about to get a term sheet early next week and would love to know where you stand” are a great tool – so long as you can stand behind them.

To sum up, VCs speak a different language, one that Founders must learn to be able to raise capital. Understand the psychological drivers and use them to evaluate your counterpart’s state of mind. And repeat the core narratives: we are low risk; we will be huge; others are interested and moving forward. Go get funded!

Stay up to speed
Weekly resources, news, and stories. Be the first to know and get insider tips.
209,096 startups read our weekly essays.
Connect with
Gigi Levy-Weiss